TriDelta Q4 Review – Back to ‘normal’ 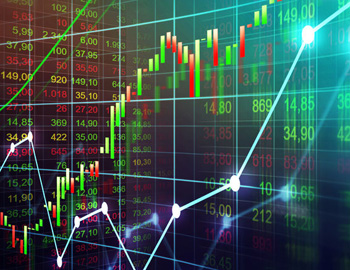 At the end of December 2018, markets had just completed one of the worst quarters in several years.  The general view was very weak.

Today, many investors are much more positive after very strong returns in 2019.

Where that leaves us today is much more in the middle in terms of our outlook for 2020.

On the positive side, interest rates remain very low and the general trend is for them to remain at these levels for a while.  In addition, global growth is showing some signs of improvement after real slowdowns in 2019.

On the negative side, U.S. markets are now at the high end of their valuations, and there isn’t a lot of room to go higher unless corporate earnings pick up strongly.  Of interest, most other equity markets, including Canada, have much more reasonable valuations at the moment.

We do not believe that a bear market is imminent.

Last quarter we said that historically, bear markets occur when at least two of the following four circumstances are found:

As of the moment, we are seeing reasonable growth with expected real GDP growth of 1.8% in the U.S. and 1.6% in Canada, so no economic recession, although certainly not stunning growth either.

There was no major commodity spike in oil prices, even with the recent Iran conflict.

No meaningful increases in interest rates are envisioned.  We expect rates to remain flat or to be slightly down in 2020.

The only bear market risk at the moment is high stock market valuations, but even the overvaluation is not significantly large.  Focusing on the S&P500 in the U.S., the measure is a trailing 12 months Price/Earnings ratio two standard deviations higher than the long term average.  While not trailing, on a forward P/E basis, the S&P500 is at 18.5 vs. a 25 year average of 16.3.  This is 0.7 standard deviations higher than average.

It is definitely something to be aware of, but not enough, especially in light of the other three criteria to put us in real concern of a bear market.

In addition, other global markets are valued more cheaply than the U.S.

This chart from J.P. Morgan highlights 25 years of the Forward P/E ratio of the S&P 500. 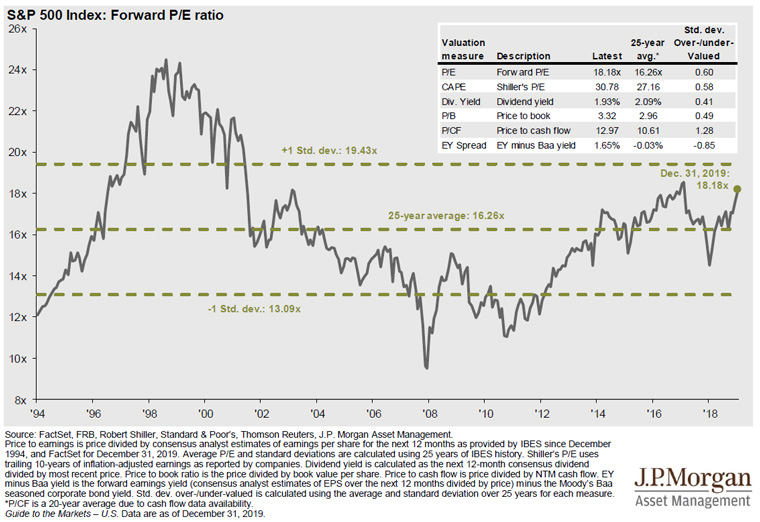 On the interest rate side of things, the Central Banks in Canada and the U.S. are both signaling little movement for the time being, although the U.S. could lower rates again before Canada does.

Strengthening of Canadian dollar vs. the U.S.

Our current view is that the CDN$ will strengthen further against the US$ this year.  The main reasons being that the U.S. Fed has lowered rates and may lower further, while Canada has not lowered rates and is less likely to lower them in 2020 vs. the U.S.  As a result, on the short end of the yield curve, Canada is now paying more than the U.S., and that is where much of the international money flow invests in (short term bonds).  The other driver is that there is more relative growth momentum in Canada than the U.S.  What we mean is that in 2018 U.S. growth was about 0.9% higher than Canada.  In 2019, it was only 0.7% higher.  This year, the U.S. GDP growth is forecast to be only 0.2% higher than Canada, despite a much higher Federal government deficit and more accommodative central bank.  We believe that this shift in growth momentum will be positive for the CDN$ vs U.S.$.

It looks like we are finally seeing some warming on the trade wars.  As expected, the Trump White House is looking for some trade wins heading into the election.  With the imminent passing of the USMCA (what we will still call NAFTA), and the first phase of a China and U.S. agreement, there are signs of some confidence that may support global growth.

Corporate earnings are expected to grow year over year by 16% according to Bloomberg, but the sentiment is for earnings growth to be lower than that.  This tells us two things.  The first is that strong earnings growth is not likely going to help ‘fix’ the high valuations in the U.S. market.  The second is that with reasonably modest earnings expectations, it is a little easier for companies to meet and exceed expectations.  Overall, we see corporate earnings numbers growing but not driving the markets higher.

According to the U.S. Energy Information Administration, global demand for oil continues to increase.  In fact, the global demand chart below is remarkably steady for a commodity with a price that can be so volatile.  This is important to remember, because with all of the focus on alternative energy it can be easy to believe that Oil consumption is in decline.

Price expectations for oil are pretty flat, in the $55 to $60 per barrel range for West Texas Intermediate, although the general trend over the past 5 years has been higher.

For energy stocks, which have struggled for several years, this stability, and even the belief of stability, can lead to some modest gains for a depressed sector. 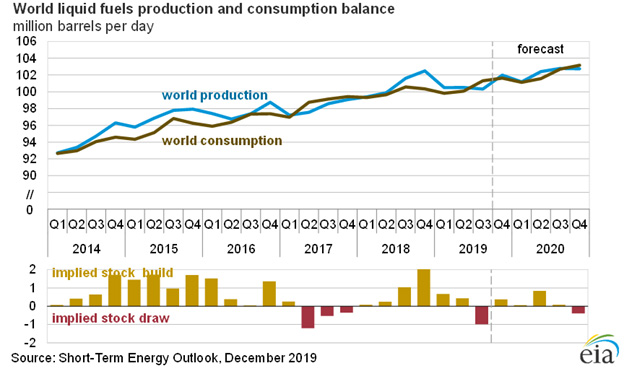 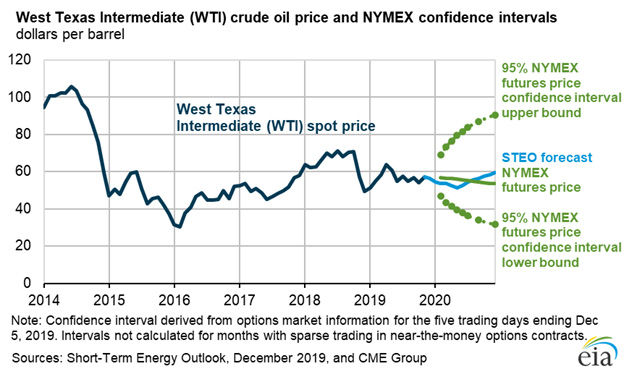 How does this impact your portfolio?

Based on this, we are starting to trim our U.S. stock weighting, and returning some of that back to Canada.  We will maintain our Global Stock weightings.  In addition, we see modest returns for bonds in 2020 and would look to be a little higher weighted in fixed rate preferred shares (with 5%+ dividend yields) as well as rate reset preferred shares, which should benefit from flattish interest rates.

Alternative investments remain an important part for our client portfolios and may be even more important given the more modest expectations from stocks.

On a sector basis, we will likely be lightening up on U.S. Health Care and looking for strong Canadian dividend growers.

Our fearless predictions for 2020:

Before we do our 2020 predictions, it is worth reviewing our 2019 predictions, which came in quite accurate overall:

Based on these short term beliefs, we have a little higher than average  cash weightings in our stock funds, and will lower our weight on U.S. stocks, increasing the weighting in Canada.  We will also more actively use options to protect against downside risk.

In the Growth fund, which is more active in terms of adjusting industries, we will be adding to Canadian Financials and Utilities and reducing U.S. Health Care.

Nine Quick Hits of news and items of interest

We expect a slightly lower than average year in stock markets overall, but do not believe that we are heading into a bear market, at least through the U.S. election.

This type of market can bring a relative premium to investments that pay decent dividends and other income returns, especially given the overall low return on cash and GICs.

Volatility is expected to be higher in 2020, and the reasons for volatility can crop up from anywhere, as we have seen with the Iranian conflict already this month.

Our goal for our clients is to build peace of mind through financial planning and developing portfolios that have much less volatility than stock indexes with a focus on income.  While stock markets are historically down three out of every ten years, we aim to have client portfolios that are rarely negative.  This is part of the reason for our Alternative Income weighting in portfolios.

At TriDelta we will continue to be nimble while focused on a long-term plan, a steady and diversified asset mix that is built appropriately for the goals of each client, and an eye on tax minimization.

Here is to a good investment year in 2020 for everyone.

VP and Head of Fixed Income

« Why investors should pay for all investment fees out of non-registered accounts FINANCIAL FACELIFT: Can Olivia and Larry retire early with an ideal income of $10,000 a month? »
© 2019 TriDelta Financial Privacy Policy