FINANCIAL FACELIFT: Can Richard and Jane afford an expensive renovation without infringing on Jane’s retirement plans?

Written by: Dianne Maley
Special to The Globe and Mail
Published May 28, 2021 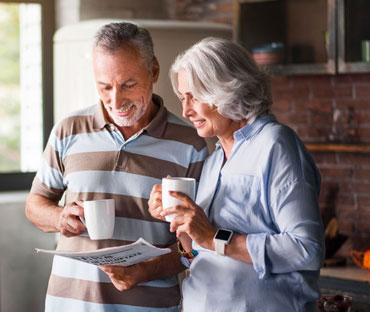 Richard is 59, retired and collecting a defined benefit pension, not indexed, of $39,660 a year. He also has substantial savings and investments. Jane is 53 and works in health care, earning about $80,000 a year. She has recently joined her pension plan at work and has the option of buying back some years of service. She wonders if it makes sense financially to do so. She hopes to retire from work at age 60.

They also wonder whether they can afford a major renovation to their small-town Ontario house without infringing on Jane’s retirement plans.

“Can we afford to indulge our interest in architecture with a major modern home renovation valued at $300,000 and still have Jane retire when she turns 60 years of age?” Richard asks in an e-mail. Their house is valued at $700,000 with a $215,000 mortgage that they took out some time ago to invest. As a result, the mortgage interest is tax-deductible. They have cash and short-term investments of about $139,000.

We asked Matthew Ardrey, a financial planner and vice-president of TriDelta Financial in Toronto, to look at Richard and Jane’s situation.

Jane is earning $73,320 a year, plus $6,800, which her employer contributes to her registered retirement savings plan, Mr. Ardrey says. Jane and Richard maximize their tax-free savings account contributions annually. Any surplus they earn is being saved for their renovation, planned for 2022.

To fund the buyback, Mr. Ardrey assumes Jane transfers her existing RRSP and locked-in retirement account, which together amount to $114,000, to her pension plan. The remainder would come from their $50,000 guaranteed investment certificate and $4,000 from the joint bank account. “Whether or not she chooses the buyback will impact the funding for the renovation, so we will look at each scenario independently,” Mr. Ardrey says.

The average rate of return for their investment portfolio is 5.16 per cent, with an average management expense ratio of 0.29 per cent – resulting in a net return of 4.87 per cent. The assumed rate of inflation is 2 per cent.

They estimate their Canada Pension Plan benefit will be $1,100 a month for Richard and $1,000 a month for Jane at age 65. The forecast assumes they take Old Age Security benefits at age 65 as well.

In the first scenario, Jane does not take the pension buyback. They take all of their cash savings, which amount to $150,000 by mid-2022, for the renovation, financing the rest of the work on their line of credit at a rate of prime plus 0.5 percentage points, or 2.95 per cent. The forecast assumes they pay this off over 10 years.

“Using the cash, which has a negative real rate of return after inflation and taxes, is a good place to start,” the planner says. For the remainder, using debt over cashing in investments is preferred. With a rate of interest of only 2.95 per cent, the “hurdle rate” to earn more than that on their investments is low.

“That being said, they certainly have the assets to pay off the entire renovation,” Mr. Ardrey says. If they were to pay for it all with investment proceeds and then borrow against the line of credit to re-establish those investments, the interest would be tax-deductible.

“They should watch interest rates,” the planner says. “If rates rise, the hurdle rate would become higher and it may be more beneficial to pay off the debt rather than reinvest it.”

In retirement, they plan to spend $65,000 a year after tax and adjusted for inflation. At Jane’s age 90, there will be an estate of $8.4-million (with inflation), including investments and real estate. “If instead of leaving a large estate, if they exhaust all of their investment assets, leaving only real estate, they can increase their spending in retirement by $48,000 per year,” Mr. Ardrey says.

In the second scenario, he looks at what happens if Jane takes the pension buyback. “As this impacts their cash savings for the renovation, they will need to borrow $210,000 from the line of credit,” he says. The result is surprisingly similar. “With the increased pension and larger loan, we would expect to see a difference, but in fact the two scenarios play out almost identically,” the planner says.

Since the quantitative factors are identical, Jane and Richard need to look at other factors when making the pension buyback decision. These would include Jane’s life expectancy, the expected rate of return on the portfolio, their willingness to assume the investment risk versus the certainty of receiving pension income, the need for financial flexibility and how much interest rates are expected to rise over time.

“The main risk in each analysis is the asset mix of their investments,” Mr. Ardrey says. Their asset mix is 10 per cent cash, 3 per cent fixed income, 35 per cent preferred shares, 4 per cent in alternative investments and 48 per cent equities, of which about 80 per cent is in Canadian stocks or stock funds. “With about 75 per cent of their portfolio invested in Canadian stocks and preferred shares, some additional geographic diversification would be beneficial,” he says.

With preferred shares, an increase in interest rates can lead to a decline in value. As well, preferred shares can be more volatile than their traditional fixed-income counterparts such as corporate bonds, he adds.

Dividend income could also affect Old Age Security benefits. “Dividends are grossed up and an offsetting dividend tax credit is given to reduce the overall tax payable. The problem with this is that the grossed-up dividend is used in the OAS calculation, increasing the chances for the OAS clawback.”

To increase their diversification, Richard and Jane might consider adding some real estate investment trusts, private or publicly traded, to their investment mix, the planner says. “REITs that invest in a large, diversified residential portfolio or perhaps specific areas like wireless network infrastructure are preferable to one that has a large exposure to retail,” Mr. Ardrey says.

The problem: Can they afford an expensive renovation? Should Jane buy back some pension benefits?

The plan: The pension decision depends on considerations such as investment expectations, risk tolerance and their outlook for interest rates. Diversify their portfolio geographically.

The payoff: A clear view of their options.