/ Investment management / Are RRSPs really worth it? The answer may surprise you

Are RRSPs really worth it? The answer may surprise you

More and more people say to me that they don’t contribute to RRSPs. They don’t think it makes sense. If they ask my opinion, my response always depends on the specifics of the person who is asking. For the purposes of this article, I will address a few different scenarios.

For all of these examples, the key factors to consider are the following: In retirement, will the person likely be in a higher tax bracket than they are today, the same bracket, or a lower one? I call this the tax teeter-totter. Will their income likely be meaningfully higher or lower in the next five to ten years? How old are they? Are they married and, if so, how long will it likely be until both spouses have passed away?

This person has seen what happens when someone dies with a large RRSP or RRIF. When a single person (including widows and widowers) dies, their remaining RRSP or RRIF balance is fully taxable in the final year. For example, if their final balance is $500,000, nearly half of their account will disappear to taxes. Because of that concern, many people with a sizable RRSP and often high income decide that the RRSP isn’t a good use of their funds. To these people I say, “You are making a mistake.” If you are in a tax bracket where you can get at least a 45 per cent refund on an RRSP contribution, I say take the money today, get many years of tax-sheltered growth, and you can worry about a high tax rate on withdrawals at some point in the future. Depending on the province, this 45 per cent tax rate tends to be in place once your taxable income is above $150,000. While you could make a financial argument that it is possible to be worse off to do an (R)RSP contribution depending on what happens in the future in terms of taxes, given the certainty of tax savings at the front end, I would highly recommend making the contribution.

Situation No. 2: Lower income that could jump meaningfully in a few years, with TFSA room 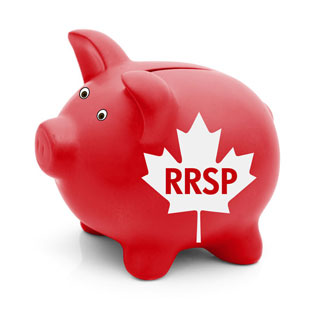 Situation No. 3: Income could fall meaningfully in a few years

This is the opposite situation and recommendation to No. 2. If you think that you will be in a much lower tax bracket in the near future (taking time off work for whatever reason), you may want to put money in the RRSP now, and actually take it out in a year when your income will otherwise be very low. Many people do not realize that you can take funds out of your regular RRSP at any time and at any age. While you will be taxed on these withdrawals as income, if the tax rate is very low because you have little other income, it usually makes sense to withdraw the money in those years and put it back when your income is much higher.

Situation No. 4: Couple in late 60s, not yet drawing from RRIF

Some people figure that there is no point to put money into an RRSP in their late 60s because they are just going to draw it out shortly anyways. It is true that one of the values of tax sheltering is the compounding benefit of time. Putting a dollar into an RRSP at age 30 will likely have more of an impact than at age 68. Having said that, often people forget that even if they start drawing funds out of a RRIF at 72 or earlier, they may very well still be drawing out funds 20 years later. There is still many years of tax sheltering benefit. The question goes back to the tax teeter-totter. If they are going to get a 25 per cent refund to put funds into their RRSP, but will be getting taxed at 30 per cent or more when they take it out, then it probably doesn’t make sense to contribute more to their RRSP. It all comes back to their likely income and tax rates once they start to draw funds down from their RRIF.

The answer to the question of how to contribute to an RRSP for couples with a significant age difference depends on the taxable income of each person and the ability to most effectively split income over the next number of years. Larger age gaps can be quite valuable for RRSP investing. One reason is that if the younger spouse has a Spousal RSP, and the older spouse still has RSP room, the older spouse can contribute to the younger spouse’s Spousal RSP. This can be done by the older spouse, even if they are older than 71, as long as the younger spouse is below that age. In this example, if the 58-year-old isn’t working, she can actually draw income out from their Spousal RSP and claim the funds only as their income, even though the 72-year-old had benefitted from the tax advantages of contributing over the years. As a reminder, if the younger person had a large Spousal RSP and the older one had no RSP or RIF, they wouldn’t be forced to draw any income because the younger partner was not yet 71. The one area to be careful of is that for the income to be attributable to the 58 year old and not the 72-year-old, there can’t be any contributions to the Spousal RSP for three years. To take advantage of this scenario, maybe the older partner contributes for many years to the Spousal RSP, but stops three years before the younger spouse plans to draw the funds.