/ Market Update / Market Commentary for May 2022

Market Commentary for May 2022

Why There is Reason for Optimism 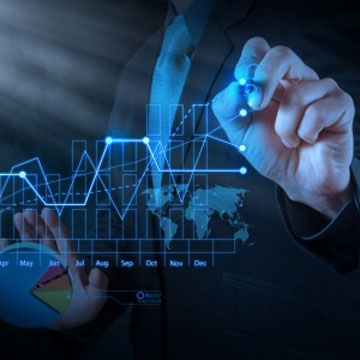 In March of 2020 the markets suffered one of the steepest drops in recent memory. From peak to bottom, the S&P 500 fell 35%. In hindsight many people who had been through the Great Financial Crisis a decade earlier saw this as an excellent opportunity to invest, while others allowed doubt to creep up to the surface. Will COVID ruin the economy? How will Central Banks and Governments be able to support businesses large and small? What happens when a large portion of the population can’t go to work? How long will a vaccine take? Now, over two years later these questions have largely been answered and while uncertainty still remains around COVID’s impact on supply chains, long term health impacts, and lingering inflation, we find ourselves in a much different investing environment.

So far in 2022 there have been very few places to hide. To the end of April, stocks are materially negative with the S&P 500 -12.14%, the TSX -2.17%, and MSCI World -12.35%. Bonds, historically a safe haven in times of declining stocks, have had one of their worst periods in decades with the FTSE Canada Bond Universe down 10.22%. Preferred shares have also been negative with the TSX Preferred Share Index down 9.29%. So, what’s behind the market’s latest tantrum?

There is a lot of uncertainty around rising interest rates at home and abroad. Rising interest rates have a lot to do with economic growth, and people and businesses have become accustomed to extremely low interest rates. As of April 13th, the Bank of Canada raised the overnight interest rate to 1.0% which has increased the interest rate consumers see on the Prime rate to 3.2%. This is up from 2.45% earlier in the year. As many have experienced firsthand, a rising interest rate means people are having to put more towards paying off their mortgage and other loans which leaves less disposable income to be spent elsewhere. This in turn can hurt companies’ sales and slow their growth which can cause them to reevaluate their own plans. These companies also take on debt to help run their business. Rising interest rates also have a direct impact on the bond markets. When interest rates rise, bond prices fall. Think of the bond investor who owned a bond paying 2.0% but that same company is now offering a similar bond for 3.0%. That investor is going to sell their 2.0% bond for the new one to lock in the higher rate. This also impacts a bonds yield. Bond yields are important because bonds are perceived as much lower risk investments relative to stocks. If the bond yield rises enough, it forces investors to consider if the expected return inherit in their stocks is sufficient to justify the risk. This hasn’t been much of a consideration the last several years because bonds were paying so little.

The ongoing conflict in Ukraine is also a key consideration for many businesses and countries globally. While the loss of life is tragic, this war also impacts countries who rely on Ukraine for the food they produce and Russia for the many metals and minerals they export. Not to mention the oil and gas which Europe had become so reliant on! This conflict and the lingering effects of COVID have continued to drive inflation. China offers an example of this in their Zero COVID Policy which continues to lock down millions of people in their homes in an effort to quell the rising cases. This in turn has impacted their trading partners who rely on manufactured goods from China creating even more scarcity in some of the goods we rely on. These factors have continued to make sourcing goods and materials very difficult for many consumers and businesses which have further driven higher inflation (evidently, less transitory than we were originally told). People are having to put more money towards their mortgage because of rising interest rates, spending more at the grocery store and the gas pump will drive spending patterns away from more discretionary purchases like a new car or home appliance.
Presently, Canada’s headline inflation rate is 6.7% while in the U.S. it is 8.5% versus the stated 2% target inflation rate. Key to the global economy will be whether these Central Banks can achieve a “soft landing” as they raise interest rates and unwind the pandemic stimulus to rein in this inflation.

While there certainly appear to be many negatives in the market right now there have been some standouts which have helped investment portfolios and offer positives for the economy overall.

In any period, there are always those who perform relatively better than the rest. Today, hard assets like metals, oil and gas, and real estate have outperformed the broader market in general. At TriDelta we employ a diverse portfolio of Alternative investments which includes real estate. We recently hosted a webinar with three real estate funds which have performed quite well (TriDelta Financial – Webinars) and have helped to insulate portfolios from some of the broader volatility in the equity and bond markets. These three funds have returned +0.77% to +7.5% to the end of April. We continue to view commodities positively and as a diversifier for portfolios. Oil and gas (+49.10% & +120.28% year to date), already on an upswing, have been propelled higher by policy decisions to cut off Russian energy. Several metals have also been pushed higher due to the conflict and increased uncertainty elsewhere. Gold is up 5.09% since the start of 2022.

Unemployment in Canada and the US continued to fall to historic lows at 5.2% and 3.6% respectively. A strong labour market has continued to propel wages higher. 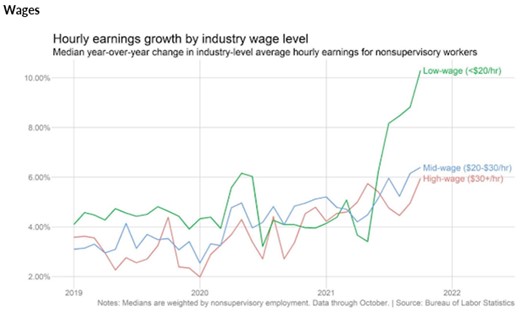 The Value of Active Management
We continue to place an emphasis on active management for investment portfolios. Equity markets have generally not performed well. In terms of Canadian dollars and to the end of April the returns of various markets are as follows: 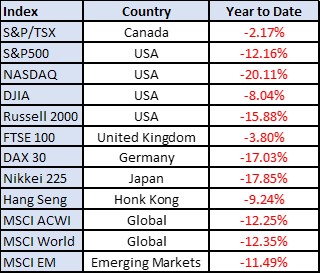 Here at TriDelta we have two equity funds managed by our Head of Equities Cameron Winser that have outperformed many of these broader markets. To the end of April, the TriDelta Pension Equity Fund has returned -1.14% and the TriDelta Growth Fund -6.44%. While we never pretend to know what the markets will do tomorrow, next week, or next year, we see these portfolios as being well positioned moving forward to capitalize on the increased volatility in the market. Both funds remain highly active into the start of this year and have hovered between 10% to 12% in cash to help take advantage of near-term opportunities. We think the performance of these two funds speaks volumes as to why active management is so important in times of market uncertainty.

As mentioned above, no one can say with absolute certainty what the markets will do tomorrow, next week, or next year and anyone who makes those claims is not someone you would want to be associated with. No one can control what the market is doing or will do but what we can control is our emotion in times like today. Using history as a guide shows us that, over time, there have been more good days than bad and the key to seeing a favourable return is the ability to ride out the bad and stay invested with a long-term perspective. 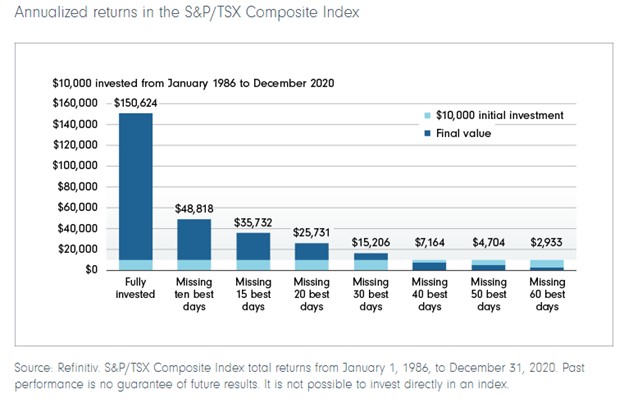 In times like today something we frequently hear is “I will invest when things calm down.” What people mean is they will invest once markets start to go up. The problem is that it is those first few days and weeks of significant recovery that get missed when you wait until “things calm down”, and that is precisely when someone can miss some of the very best days in the market.

“Whether we’re talking about socks or stocks, I like buying quality merchandise when it is marked down.”
— Warren Buffett in his letter to shareholders, 2009