You’re invited to our first annual ‘TriDelta Alzheimer’s Gathering’ event, which will take place in the beautiful setting, beneath the huge Oak trees on the Erchless Estate and neighbouring Lakeside Park at the end of Navy street in Downtown Oakville. 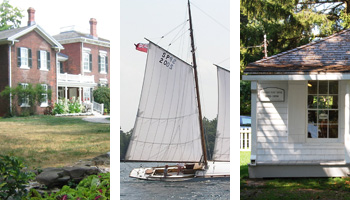 We’re hosting a family fun day full of activities and access to various historical sites including:

Please join us for this fun family day with our special guests – Oakville Seniors – and their families, but everyone is invited.

Our wonderful event partners include the Alzheimer’s Society, Oakville Historical Society and Oakville Museums along with many generous volunteers.

Leaving money to charity in your will? There is a better way

I recently met with someone who wants to leave all of their money to two charities. They put this in place because they didn’t have close family members (or didn’t feel the family members needed the money), and they wanted to leave a real legacy to a couple of causes that were close to them.

While it seemed like his estate plan made sense, there are better ways to leave that legacy than through a will — ways that could grow the amount of giving by over $100,000.

Here are 3 problems with leaving money to charities in the will:

1. By leaving money to a registered charity you will receive a charitable tax credit of between 40% and 50%. The only issue is that you will only receive the tax credit on charitable giving of up to 75% of your current years’ income. For example, if you make $100,000, you could give up to $75,000 and receive the full tax credit. In your ‘final’ tax return, you will get a credit for up to 100% of your income.

The problem is if you have income of $80,000 in your final return, and leave $800,000 to charity, you will have foregone almost $360,000 of tax credits! If you die with a very large RIF, this may work because your RIF would be considered as income on your final tax return (if you don’t have a surviving spouse). Otherwise, it is a real missed opportunity.

2. Wills with very large charitable giving occasionally are contested by family members who feel that they should have received more. This can cause lots of delays, legal costs and heartache. All can be avoided by giving to the charities outside of the Will.

3. You are paying too much tax. In many cases, this money is getting taxed every year sitting in a non-registered investment account, never being spent. Finally it will go to the estate, and in some cases be hit with a probate fee as much as 1.5%, and then go to the charity.

The best way to avoid these problems is by some blend of giving annually and taking out a life insurance policy with the charity as beneficiary. By giving annually you will almost always be in a position to receive the full charitable tax credit (unless you give a very large amount).

You will also have significant flexibility in terms of how much to give, who to give to, and be able to change your mind any year you wish. The charity will also benefit today instead of having to wait for many years.

aking out a life insurance policy is not as common, but is actually one of the best ways to leave a charitable legacy. Using an insurance policy with the charity as a beneficiary can be a quadruple benefit if you qualify. The first benefit is that if it is structured properly, the annual insurance premiums can be considered annual charitable giving, so that you get the tax benefit each year.

The second benefit is that the insurance policy bypasses the estate, and is paid directly to the charity. This avoids estate battles over the funds.

The third benefit is that the proceeds avoid probate because they don’t form part of the estate. In Ontario, this 1.5% fee can add up on a major charitable gift.

The fourth benefit is if you are in reasonable health for your age (even if you are 75 or 80 years old), the ‘rate of return’ on the insurance can be much higher than other options. This is because the money is tax sheltered and as a permanent life insurance policy, the actual rate of return (money put in vs. money that comes out) is often well over 7% per year.

There are several other good ways to leave funds to charities including community foundations, setting up a private foundation and donor advised funds. Every one of these options requires some personal planning to determine what makes the most sense for your situation.

In the case of the 85-year-old, by giving $30,000 a year to charity they are receiving the full tax credit every year. If he lives to age 97, he should still have an estate of about $200,000. If he is still alive at 97, he can stop giving to charity in order to ensure he has funds to cover another ten years. In his case, if we assume he lives to age 97, he will have given an extra $100,000 to the charities than if he simply left the money in his will, and he will have been able to see the impact of his giving in his lifetime.

Leaving significant money to charity can be of great value to you, the charity and society at large. However, if the plan is to simply leave it through your will, there are likely many other smarter ways to make a bigger impact with the same funds.