/ Budgeting / FINANCIAL FACELIFT: Can Owen and Emily afford to retire next year and spend winters overseas?

FINANCIAL FACELIFT: Can Owen and Emily afford to retire next year and spend winters overseas?

Written by: Dianne Maley
Special to The Globe and Mail
Published November 5, 2021 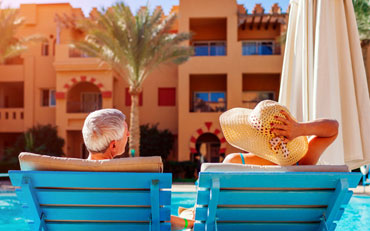 Owen and Emily – freelancers in their early 60s – amassed $1.7-million in financial assets the old-fashioned way. No inheritance or real estate windfall helped them. They raised two children, now 22 and 29, and their house in small-town Ontario is fully paid for.

“The lower cost of living here might have played a small role, but we always spent less than we earned,” Owen writes in an e-mail. “We paid for our house after eight years and we have invested our savings in passive investments, mostly exchange-traded funds, on a buy and hold basis,” he writes.

Emily and Owen are hoping to hang up their hats next year and travel, spending Canadian winters overseas. They wonder whether they can contribute $25,000 a year for a few years for their younger child’s overseas studies. Their retirement spending goal is $70,000 a year, much more than they are spending now.

“What is our best strategy to withdraw our investment money to support our lifestyle?” Owen asks.

We asked Matthew Ardrey, a vice-president, portfolio manager and financial planner at TriDelta Financial in Toronto, to look at Owen and Emily’s situation.

Owen and Emily are looking to retire next summer after years working at a successful business, Mr. Ardrey says. “Before they do, they want to ensure that they have accumulated enough assets to make the switch from earning a living to enjoying retirement.”

They are saving the maximum to their tax-free savings accounts. Any other surpluses are being held in their personal and corporate bank accounts, the planner says. The higher spending they anticipate will be for travelling and “focusing more on enjoying life,” the planner says. Their current spending has likely been constrained by the COVID pandemic, he adds.

Emily and Owen would like to support their son for the next five years while he is overseas by giving him $25,000 a year, Mr. Ardrey says. “If this is not feasible, it’s not necessary, but it’s certainly something they would do if they could.”

Part of what they would like to understand is how to draw down or “decumulate” the assets they hold in their corporation, their registered retirement savings plans and their TFSAs, “not to mention a sizable balance in their cash accounts,” the planner says.

He suggests a fixed draw on the corporate assets to create a steady income stream much like a pension. Spreading out the income they receive also will help keep their tax bill down, he says. “This would provide them with $2,000 per month (total) starting in retirement, indexed to inflation.”

Mr. Ardrey recommends they “melt down” their RRSP assets before they take Canada Pension Plan and Old Age Security benefits. They could take withdrawals of $20,000 each a year, which would create a level income stream until they start collecting government benefits at age 65. The forecast assumes they will get 70 per cent of the maximum CPP benefit.

Before analyzing their retirement cash flow, the planner says he must first analyze their portfolio construction. “If we ignore the large cash balances, which will likely be used to pay for their son’s living costs overseas, they have a portfolio that is about 87-per-cent stocks and 13-per-cent fixed income,” Mr. Ardrey says. “Though that mix is great for accumulation, it has considerable volatility risk inherent in it, which is not appropriate for decumulation,” the planner says.

“On top of the volatility risk, there is significant company-specific risk, with one stock making up 32 per cent of the entire portfolio.” This stock has a huge imbedded capital gain, he notes. “The only saving grace is it is in the corporation, so selling the stock will increase the capital dividend account, allowing for tax-free withdrawal of part of the gain.”

The capital dividend account is funded by the non-taxable portion of a capital gain in a corporation, currently 50 per cent. This account permits tax-free withdrawals from the corporation by the shareholders.

In preparing his forecast, the planner assumes Emily and Owen reduce their stock exposure to 60 per cent in retirement and allocate the remainder to bonds. He assumes a rate of return on investments of 3.84 per cent (historical) and an inflation rate of 2 per cent. “Though adding bonds limits the volatility risk, it lowers the return they can earn, and also adds risks from inflation and interest rate increases,” he says. Even so, running the projection under these conditions allows them to meet their retirement spending goal and help their son with his expenses, Mr. Ardrey says.

“Things change if we stress-test the projection using a Monte Carlo simulation.”

A Monte Carlo simulation is a computer program that introduces randomness to a number of factors, including returns. “In this plan, we have run 500 iterations with the financial planning software,” the planner says. For a plan to be considered likely to succeed, it must have at least a 90-per-cent success rate. If it is below 70 per cent, then it is considered unlikely.

“In the case of Owen and Emily, they achieved a success rate of 89 per cent, so they are just under the likely marker,” he says.

“Owen and Emily’s diligent saving has made it possible for their retirement dream to be realized,” Mr. Ardrey says, “although with their portfolio in its current form, there are certainly some risks they need to address.” By addressing these concerns, he says, “they can improve the likelihood they will achieve all of their financial goals.”

The problem: Can they afford to retire next year with a budget of $70,000 a year after tax while still helping their younger child with overseas living expenses? What is the best way to draw down their savings?

The plan: Treat the corporate savings like a pension, making regular monthly withdrawals that rise with inflation. Melt down their RRSPs as much as possible before taking government benefits.

The payoff: A secure retirement with enough money to travel and winter overseas.