/ Retirement Planning / FINANCIAL FACELIFT: What can I do to be more financially successful as I enter my 40s?

FINANCIAL FACELIFT: What can I do to be more financially successful as I enter my 40s?

Below you will find a real life case study of an individual who is looking for financial advice on how best to arrange their financial affairs. Their name and details have been changed to protect their identity. The Globe and Mail often seeks the advice of our VP, Wealth Advisor, Matthew Ardrey, to review and analyze the situation and then provide his solutions to the participants.

Written by: Dianne Maley
Special to The Globe and Mail
Published November 8, 2019 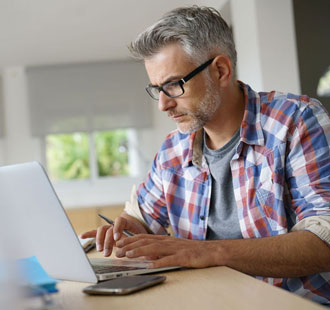 Philip has a well-paying government job with a defined benefit pension plan, for which he is “fortunate and grateful,” he writes in an e-mail. He earns $112,000 a year in salary plus another $9,500 a year, net of expenses, consulting.

At 40, though, Philip is feeling uneasy about his prospects and wondering “how to better manage my finances for the near and distant future.” His near-term goals are to buy a new car and, in five years, a larger condo than the one-bedroom he owns now. In pricey Toronto, this would mean taking on a much bigger mortgage. He still has 23 years left to go on his existing mortgage loan.

Long term, Philip’s goal is to retire from work at age 58 and maintain his lifestyle. He recognizes that these might be competing goals. “I’ve been managing my finances to the best of my knowledge, reading up on budgeting and investment strategies, and now worry if I’m on the right track,” he writes. “What can I do to be more financially successful as I enter my 40s?”

He asks, too: “Am I saving enough for retirement at 58 with a desired after-tax income of $70,000? Am I investing my money wisely? Will I be in a position to purchase a bigger condo in five years?”

We asked Matthew Ardrey, a financial planner and vice-president of TriDelta Financial in Toronto, to look at Philip’s situation.

In reviewing the initial numbers Philip submitted, Mr. Ardrey detected a few things that seemed out of whack. As it turned out, Philip had overstated his consulting income and understated his expenses. After adjusting his income, there is still some missing money, the planner says. Philip is saving about $850 a month outside his registered retirement savings plan. “The remaining $895 per month is real budget leakage,” the planner says. “The first thing Philip should do is a full and complete review of his budget.”

Philip acknowledged this in a follow-up e-mail. “I’m clearly not accounting for all my expenses and travelling,” he writes. “I need to be more mindful of this.”

Next, Mr. Ardrey looks at the car purchase. He assumes Philip buys a new car at the beginning of 2021, taking $5,000 from his savings for a down payment and making monthly payments of $300 for five years. If interest rates stay low, he could likely finance the car at zero interest “or near to it.”

Philip is contributing about $12,200 a year to his defined benefit pension plan, plus making $3,100 a year in additional voluntary contributions (AVCs) to a work RRSP run by his pension plan manager. He is putting $10,200 a year into a savings account.

When Philip sells his condo and buys a larger one in 2025, he will no longer be able to tuck away $10,200 a year in his savings account, the planner says. The condo purchase price, adjusted for inflation, is assumed to be $911,000. Not only will he have transaction costs, Philip will have to pay off his existing mortgage. Mr. Ardrey’s forecast assumes Philip takes on a new mortgage of $590,000 at 4 per cent interest, amortized over 25 years. His payments will rise to $3,092 a month from $1,705 now. Unless he makes extra payments, he will still have a mortgage balance of about $344,465 outstanding when he retires from work in 18 years. To pay off the mortgage before then, he would have to make extra payments of $8,800 a year, putting a strain on his finances, the planner says.

At age 58, Philip will be eligible for an unreduced pension of $73,000 a year, plus a bridge benefit of $15,250 a year to age 65. “Both are indexed to inflation, which is assumed to be 2 per cent,” Mr. Ardrey says. By then, Philip’s spending target will have risen in line with inflation.

Philip’s spending goal is over and above any mortgage payments he might still be making, the planner notes. “Based on these assumptions, Philip would fall short of his goal,” Mr. Ardrey says. By the time Philip turned 65, he would be running budget shortfalls of about $45,000 a year in future dollars, the planner says. This would fall after his mortgage was paid off – assuming he could hang in that long – but he would still be in the red by about $20,000 a year.

“He would need to reduce his retirement spending by $1,000 per month or work another six years until age 64,” the planner says. By working longer, his pension would be larger and the number of years he would be retired smaller.

What if Philip stays put and doesn’t buy the more expensive place?

Suppose, instead, he moves his savings ($59,000) to a tax-free savings account, tops it up to the maximum ($63,500) and contributes $6,000 to it each year? With savings of $10,200 a year, that would leave him with $4,200 to put into a non-registered investment account. Both the TFSA and the non-registered account would be invested in a balanced portfolio of stocks and bonds. The assumed rate of return would be 5 per cent, Mr. Ardrey says.

These small changes could be enough to enable Philip to achieve his goal of retiring at 58 and spending $70,000 a year, the planner says. “The big differences would be the better rate of return than he is getting in his savings account, the continued ability to save each year that he is working and a smaller mortgage, hence smaller mortgage payments, in retirement.”

Philip has been using his savings account as an emergency fund, Mr. Ardrey says. “Instead of holding large amounts of cash, I’d suggest he use a secured line of credit against his home.”

The problem: Can he afford to buy a bigger place and still retire early with $70,000 a year?

The plan: Work longer, invest the cash stash and consider putting off the condo upgrade entirely.

The payoff: Recognizing that he can’t achieve all of his goals at once and may have to make some choices.