Retirement Shouldn’t be a Taxing Transition 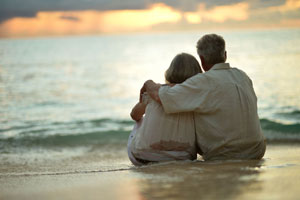 When people think of retirement, they make think of relaxing at the cottage, traveling the world, or maybe with the recent blasts of winter we have been receiving, spending some time in warmer climates. What most people don’t think about is how my taxes are going to change. Yes, with April just around the corner, it is time to think about taxes and how they will affect you in retirement could be the difference from lying on a beach in February and shoveling your driveway for the fifth time this week.

If like many Canadians, you are a couple where both spouses work, the opportunities to split income are few and far between. In retirement that changes for the better. A number of years ago the government introduced legislation that allows pension income to be split between spouses. If you are already the lucky recipient of income from a defined benefit (DB) pension plan, you can further benefit by splitting up to 50% of this income with your spouse. The obvious benefit to this is the lower income spouse would pay less tax on the pension income than the higher income spouse.  Also, he/she would now receive the pension credit, which is a non-refundable federal tax credit that maxes out at $2,000. So depending on the disparity of the tax rates between spouses and size of the pension, this could be a material benefit to their tax returns saving thousands of dollars a year in taxes.

Ok, that is great for those Canadians who have a pension, but what about the rest of us?

Once a taxpayer is over the age of 65, they can split life annuity, RRIF and LIF income in the same manner as DB pension income. This can lead to some interesting tax planning for someone who is doing a RRSP meltdown strategy. If one spouse has a much larger RRSP/RRIF than the other, they can double the meltdown amount by taking it from a RRIF instead of a RRSP after the age of 65. In doing this, the RRSP (or RRIF in this case) meltdown strategy could be extended to age 70, with CPP and OAS deferrals.

Other benefits to income splitting include being able to claim the age amount tax credit and possibly reducing or eliminating OAS clawback.

The mechanism for doing this in your taxes is relatively straightforward and does not have to be implemented until you file your taxes the following April. There is a form T1032 in your tax return where you make the pension election. Most tax software these days will do the calculation for you. Once all of your other information is entered for you and your spouse, the software will optimize the pension splitting between spouses. Even if you both have a pension, it can do this for you.

The topic of income splitting continues with your government pensions. Though OAS is not eligible to be shared, the CPP is. You and your spouse can apply to share your CPPs. You both have to be contributors at some point in your lives and both be receiving the pension. The amount eligible to share is based on your joint contributory period, which is just a fancy way of saying the time you were married or cohabitating. The benefit increases with the difference between CPP payment amounts.

How does it work?

Let’s take you back to grade school where we learned about fractions. The CPP you receive is a fraction of the maximum payable, ignoring any early penalties or deferring benefits. The total number of years is 47 (age 18-65). The general drop out provision eliminates the lowest eight, making the denominator 39. Any year you make the maximum contribution you get a 1 in the numerator and if not, then a number between 0 to less than 1.

The child rearing drop out provision allows a spouse who may have stopped or reduced their work due to child care, to eliminate up to seven years per child (no double counting years if you have children close in age). The benefit is any year that has less than a 1 in the numerator that is eliminated, will increase the overall CPP payable to you.

Another tax surprise for many retirees is tax installments. If you were self-employed, you will be familiar with these, but many salaried employees are not. Tax installments are requested by CRA once your taxes payable less your taxes deducted at source exceed $3,000. While working, your employer took taxes at source. In addition, you probably had RRSP deductions and other things that reduced your taxes or generated you a refund. Now with RRIF payments, CPP, OAS and other incomes, you may end up owing taxes.

CRA wants to get its taxes earlier rather than waiting until April. So it will request them of you in four quarterly installments over the year. This is CRA’s estimate of what you will owe this year based on previous years’ filings. You can choose to pay what they request or not if you feel your situation is different this year. But be warned, if you underpay your taxes you will be charged installment interest. If you overpay them, CRA does not pay you any interest on the overpayment. Nice work if you can get it!

After all this talk of taxes, maybe all you do want to do is lie on a beach or somewhere warm.

When you do, if you are like many Canadians, you will head to our neighbours to the south. However, before you do, consider some of the tax implications of doing so.

If you fall in love with the warm weather, you may be tempted to purchase a vacation home in the U.S. In doing so, you have opened yourself up to U.S. Estate Tax exposure. By owning U.S. real property, you are considered to have U.S. situs property, which falls under the U.S. estate tax laws. The likelihood that you will end up paying any estate tax these days is low because of the increase threshold limits, but consult someone familiar with the rules before making a purchase.

Another exposure with spending time in the U.S., is actually the time you spend in the U.S. The U.S. has a substantial presence test where they could deem you a resident for U.S. tax purposes if the calculation shows you spent over 182 days there in the past three years.

Consider the calculation for someone who spends 4 months (120 days) in the U.S. per year.

Thus, by spending four months in the U.S., this person’s substantial presence test calculation is at 180 days, very close to the threshold.

So thought the pressures of work may be days gone by, the tax complexity often ramps up in retirement. Make sure you are set up to optimize your tax situation in retirement, as proper planning can allow you to have your fun in the sun instead of being left out in the cold.