/ Retirement Planning / FINANCIAL FACELIFT: With ambitious retirement goals, will this couple have enough to meet their lifestyle needs?

FINANCIAL FACELIFT: With ambitious retirement goals, will this couple have enough to meet their lifestyle needs?

Below you will find a real life case study of a couple who are looking for financial advice on how best to arrange their financial affairs. Their names and details have been changed to protect their identities. The Globe and Mail often seeks the advice of our VP, Wealth Advisor, Matthew Ardrey, to review and analyze the situation and then provide his solutions to the participants.

Written by: DIANNE MALEY
Special to The Globe and Mail
Published January 18, 2019 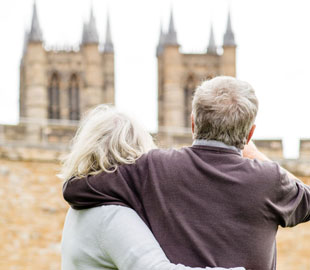 Shawn has a defined benefit pension plan that will pay him about $21,000 a year starting in 2020. Both have substantial sums in defined contribution pension plans, which depend on financial market performance for their value. Shawn’s is from a previous employer.

They have a house in Saskatchewan with a mortgage and two grown children, one of whom is living at home. They are helping one of the children pay off a student loan.

Their retirement goals are ambitious: winters down south, frequent trips to visit family and some overseas travel, as well. This leads them to a spending target of $90,000 a year for the first 10 years, falling thereafter. Their plan to retire early would require them to draw heavily on their DC pension plans in the first few years.

We asked Matthew Ardrey, a vice-president and portfolio manager at TriDelta Financial in Toronto, to look at Shawn and Sharon’s situation.

Mr. Ardrey looks at how Shawn and Sharon would fare if they retired in a year and a half – on June 1, 2020 – and deferred Canada Pension Plan benefits to age 65 as planned.

Further saving potential is limited. While they show a surplus in their cash-flow statement, this money is going to travel and helping their son pay off his student loan, the planner notes.

“Once they retire, they will need to draw on their registered assets almost immediately,” Mr. Ardrey says. Their DC pension plans are a bit different from most. Usually DC pension plans are converted into locked-in retirement accounts (LIRA) when a person retires and then to a life income fund (LIF) when they begin drawing a pension. Sharon’s DC plan can stay with the Saskatchewan government’s Public Employees Pension Plan administration and be transferred to what is known as a variable pension benefit account. Or it can be transferred out to what is known as a prescribed registered retirement income fund (PRRIF). Shawn’s locked-in retirement account (from his DC plan) can be transferred into a PRRIF as well.

The advantage of a PRRIF is that you can take locked-in money from a pension (a LIRA) between the ages of 55 and 72 instead of putting it into a LIF, which has maximum withdrawal restrictions. “So essentially, it is allowing locked-in money to be used like regular RRIF money” from an RRSP, the planner says.

“The advantage here is that there are no maximum withdrawals in these accounts, allowing them the necessary financial flexibility to draw on their savings,” he says.

But are their savings enough to last a lifetime?

Shawn and Sharon are currently spending about $76,000 a year once debt repayment and savings are subtracted. They would like to raise this to $90,000 a year when they retire to allow for additional travel in the first 10 years.

“Based on these assumptions, Shawn and Sharon will not be able to achieve their goal,” Mr. Ardrey says. They will fall short in their later years, when Shawn is about age 85. They would still have their house, which they could sell, but “I much prefer to leave the home intact as a financial cushion to cover unexpected expenses,” the planner says.

They could alter their plans, working longer, saving more and spending less in retirement. Or they could take steps to improve their investment returns after fees. Leaving their goals intact, Mr. Ardrey looks at how they might fare if they sought professional investment management for their entire portfolio, their personal savings and their combined work pension money.

As it is, their RRSPs are 75 per cent in stocks, which is high, given how close they are to retiring, he says. Instead, the planner suggests they add some alternative income investments to their portfolio, something they can do by hiring an investment counsellor (portfolio manager) with expertise in the area. Alternative income funds include such strategies as private debt, accounts receivable factoring and global real estate.

Doing so should boost their investment returns to about 6.5 per cent, or 5 per cent a year after subtracting investment costs of 1.5 percentage points. “In Shawn and Sharon’s case, the value [in alternative investments] is not only the increased return, but also the reduction in equity exposure, reducing the overall portfolio volatility.”

The effect of a 5-per-cent net return on their retirement plan would be dramatic, Mr. Ardrey says. “Instead of falling short of their goal and running out of money when Shawn is 85 they would have more than enough to meet their lifestyle needs.” They would even be able to increase their spending by $9,000 a year if they chose to.

The problem: Can they afford to retire early and travel without running out of savings?

The plan: Either adjust the goals or take steps to improve their investment returns after fees by hiring a professional money manager.

The payoff: With higher returns, they could well meet their original goals.