Our view has always been that given that markets go up pretty steadily over the long term, it is much better to be invested for the long term as opposed to trying to be right three times in a row on timing.

What I will say about timing is that at times like these, you can lock in some meaningful long term income that can help to carry your investments through the future ups and downs. Specifically, there are companies that are now yielding 4.5 per cent or more per year, while trading at low valuations, even though they made more money in 2018 than any time in their history.

These investments remind me why markets go in cycles and don’t simply go up when times are good, and don’t simply go down when times are bad. When good companies get cheap, sometimes even the worst headlines won’t keep good investors from buying. The companies that I will discuss today were decent companies when they were priced 20 per cent or 30 per cent higher than today. Now they are very compelling buys.

These companies won’t stay long as such bargains. Maybe they will be even bigger bargains in the weeks ahead, but when you look back at January 2019 in five years, you will likely be happy that you were able to buy these companies at the prices and yields that you did. (Disclosure: My firm owns all four investments mentioned in this column.) 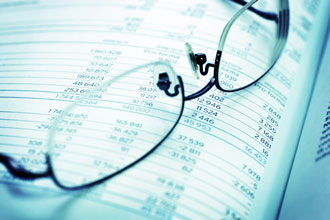 New Flyer Industries is a Winnipeg-based company that manufactures and services transit buses and motor coaches. The stock was down 42 per cent in 2018 and down 25 per cent in the final three months of the year. Today it trades at around $34 a share, has a dividend yield of 4.5 per cent, and is trading at 8.8 times its forward earnings — a significant discount to its long-term average. During the terrible returns for the stock in 2018 it has seen its earnings continue to grow, as it has for the past six years. It is very integrated in both Canada and the U.S., and while there were some worries about how NAFTA would impact operations it looks fairly positive at this point. Today it is simply a great deal.

Bank of Nova Scotia has been the worst performer of the Big Six banks over the past two years. One of the reasons that this is important is that historically when a big Canadian bank underperforms it tends to play catch up. Bank of Nova Scotia is definitely different than its peers from an international strategy standpoint, but it made two big Canadian acquisitions in 2018 with MD Management and Jarislowsky Fraser. It currently pays a five per cent dividend and is trading at 9.8 times its forward earnings. It looks a cheap price to pay for a five per cent dividend.

LyondellBasell is a petrochemical producer based in the U.S. and Europe. With a market cap of US$32 billion, this large cap company is paying a 4.6 per cent dividend yield, is trading at 6.7 times next years’ earnings, and despite record earnings in 2018, the stock has dropped 24 per cent in the past 6 months. While not Canadian dividends for tax purposes, 4.6 per cent is still 4.6 per cent.

The current dividend yield on Canaccord’s Preferred Share Series C is 7.75 per cent. It pays $1.248 a year in dividend and is currently priced at $16.10. This dividend amount is in place until June 30, 2022 at which point it could go up or down depending on the five-year Government of Canada rate at the time. It has been trading in the $18 to $19 range for the last year and a half. In early November it was $18.09. It dropped to $15.15 on December 15. While Canaccord is a higher-risk name (they are a mid-sized investment brokerage firm) than a Big Bank preferred share, we believe that a 7.75 per cent dividend is a great yield on an investment that should likely be trading 10-per-cent-plus higher.

Part of the reason for my confidence in investing in these names now goes back to the basic fact that markets go up over time, and if there has been a solid pullback, then you will probably get a bit of a boost in your investment on yield and ultimately capital gains.

The attached chart looks at the S&P 500 since 1940, and the seven worst quarters it has experienced. It then looks at the market performance in the one year, three year and five years after that terrible quarter. Most investors would have been happy with the one year return in six of those seven scenarios, and happy with seven of seven scenarios for three-year and five-year returns. 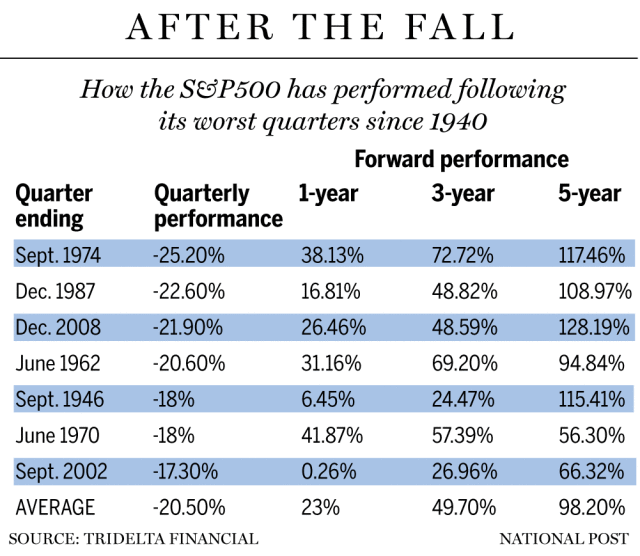 We have no idea what will happen in the markets in the next day or week or month, but the stock markets in the long run haven’t let me down so far, and buying cheap with high yields makes it an even better bet.