/ Quarterly report / Q3 TriDelta Investment Review – TriDelta is Expanding, but What About the Market?

Q3 TriDelta Investment Review – TriDelta is Expanding, but What About the Market? 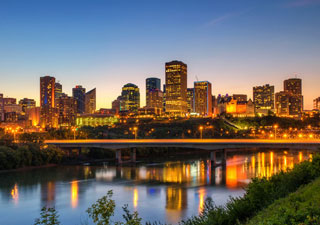 We wanted to kick off the fourth quarter with some TriDelta news, by announcing the opening of TriDelta’s Edmonton office.

The office is led by Arlene Pelley, an industry veteran who is joining the firm and planting the TriDelta flag in Western Canada. Click here to learn more about Arlene’s background.

Turning from TriDelta growth to the markets, we see reason for some caution after a meaningful pullback to start October and negative returns for most equity and fixed income indices in September. Through this period, we have been holding higher levels of cash at approximately 10%-15% in the equity funds, and while we see more short term volatility this month, we will be lowering our cash position shortly as the pullback is bringing with it lower valuations and opportunities to buy good companies at cheaper prices.

Looking at things from a purely 2018 point of view, the recent pullback has been caused by:

Of interest, the reason it is so hard to predict the exact timing of a pullback is that the factors listed above are not new. Interestingly, on the trade front, the signing of the new NAFTA deal (USMCA) should have somewhat lowered trade concerns in Canada, US and Mexico, but all of those equity markets are down since September 30. These have all been issues of concern for many months, yet for some reason early October has been the time for a meaningful pullback. It is worth noting that in a typical calendar year, equity markets experience at least two drops of 5% and one drop of 10%+, yet in the vast majority of cases, equity markets still return highly positive returns year over year.

The chart below is the VIX index, which looks at volatility in the U.S. markets. The chart shows that over the past 27 years, volatility has definitely peaked in October. Studies of the S&P/TSX in Canada have demonstrated similar high volatility levels in October. 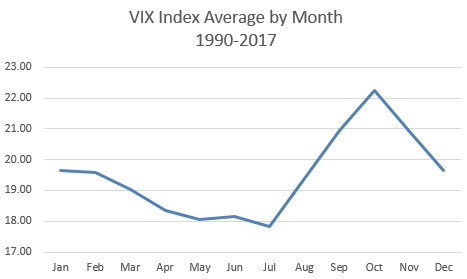 Of interest, high volatility does not necessarily translate into poor overall returns. In fact, for the S&P500 index in the U.S., since 1950, October has had an average monthly return of +0.78%. Historically, the two best months of the year are November +1.39% and December +1.53%. Over the past twenty years, the TSX has had the following returns over the same three months: 0.7%, 0.9% and 1.8%.

The chart below comes from equityclock.com. It looks at the TSX over the past 20 years from a seasonality perspective, meaning, when is the most and least productive times of the year to invest. Of interest, it suggests that one of the best times for new investment is around mid-October. 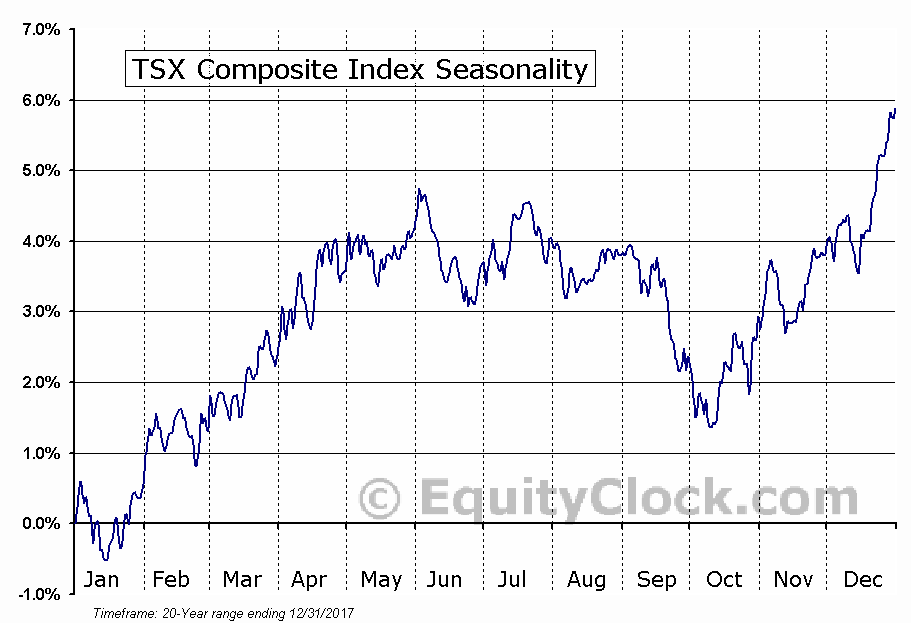 From a purely seasonal standpoint, it suggests that it is worth hanging on through the October volatility as there is often a strong payoff during the fourth quarter.

In addition, in both Canada and the U.S., the third quarter has historically been the worst quarter for returns while the fourth quarter has been the best.

Interest rates: one of the most talked about concerns for the stock market is the fear of rising interest rates. Over the past 30 years, there have been six periods of meaningfully rising bond yields as measured by the U.S. 10 year Treasury yield. During those periods of rising rates, the stock market actually performed very well – as the following two charts from a study for CNBC show. 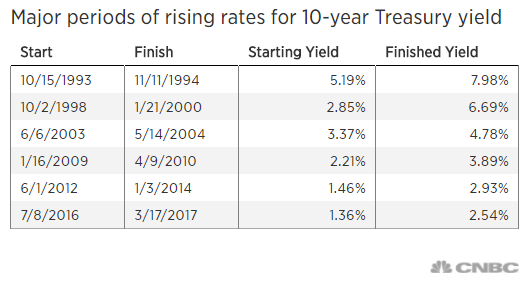 The market rose big during five of those instances and only fell slightly during the one lagging period. 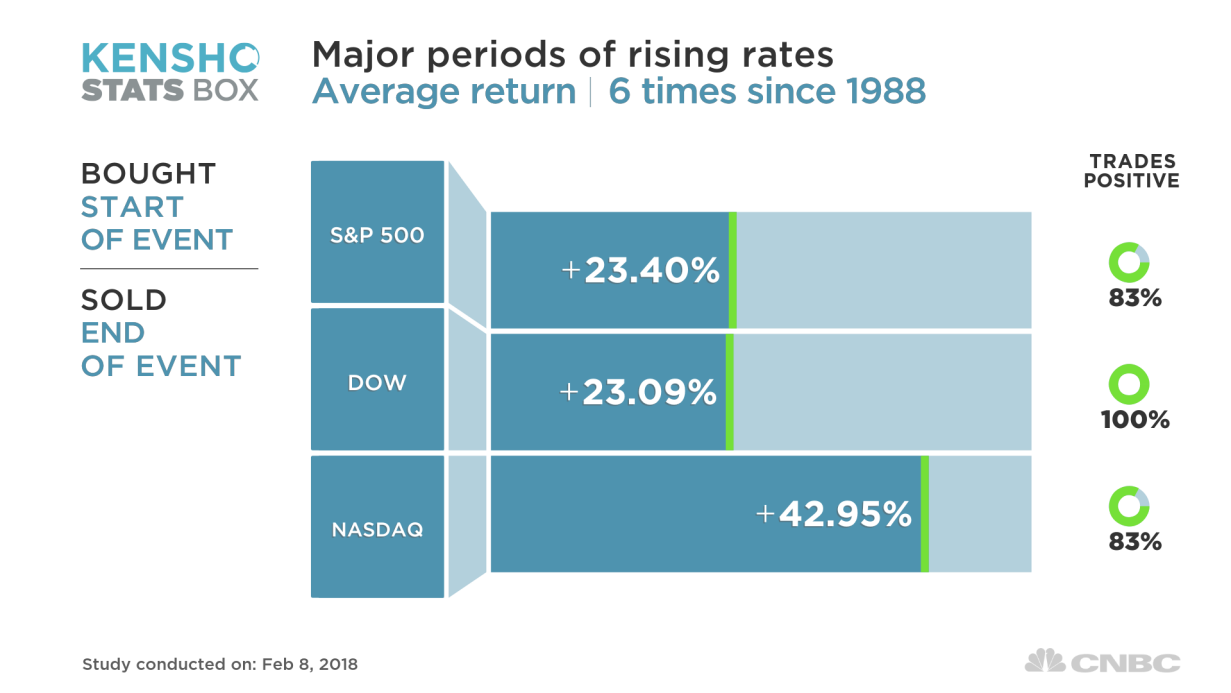 As the chart above shows, the S&P 500 rallied 23 percent on average in those time periods and the Dow Jones Index was up in all six periods.

The message is that rising bond yields often do not correlate directly with declines in stock market returns. It also should be noted that bond yields in the past week have been flat to declining.

When we factor in the reasons for the pullback, our expectations on earnings growth (which remain reasonably good), the history of similar pullbacks and seasonality effects, we think there are more reasons for optimism than pessimism.

In terms of TriDelta’s direction from here, we have been a little cautious on stock markets but we are feeling a little more comfortable in deploying more capital following the early to mid-October declines. We have reduced our weighting in non-North American and Emerging Market stocks in our Pension fund, and will be using some of that cash to soon add to Canadian and to a lesser extent, U.S. names.

We have been adding some money to Preferred Shares. There are many good quality preferred share issuers yielding over 5% in tax preferred income. In some cases, we even see the potential for some small capital gains opportunities to add to the 5%+ yields.

In the bond market, we have been adding to some names in the “belly of the curve”, the 5 year to 10 year maturity range. We have added recently-issued bonds from BMO and TD maturing in five and ten years respectively and currently paying in the mid-3% range. We also added a bond from first-time issuer Sysco Canada (a U.S. based food services company), with a seven-year maturity, paying 3.7%.

One of our beliefs is that there is a real possibility that the projected interest rate hikes from the Bank of Canada may not fully play out. The market is currently anticipating approximately four interest rate hikes by the Bank of Canada over the next 12 months. While we do expect a hike at the end of this month, we think additional hikes are less certain due to slowing housing activity and moderating inflation pressures. As a result, we are seeing some signs to be a little more bullish on bonds for the first time in a while.

In terms of currency, it was informative to see that the Canadian dollar climbed for only a very brief time and a relatively small amount upon the approval of the USMCA (or NAFTA for those of us who are resistant to change). We are fairly neutral on the dollar at this point, but would look to be more exposed to the Canadian dollar (i.e. sell some US$ back to CDN$) if we see our dollar get down under 76 cents.

How Did TriDelta do?

Overall, most clients had returns in the 0% to 1% range on the quarter, with more growth oriented clients having a weaker quarter based on the Growth fund’s negative return.
Looking specifically at the third quarter of 2018:

By comparison almost every equity and fixed income market outside of U.S. stock markets had a weak quarter – especially in Canadian dollar terms.

These numbers do speak to the value of a portfolio that is diversified globally and by asset class. At TriDelta we talk a great deal about lowering volatility, and the third quarter of 2018 was a good example. While most of our clients were flat to slightly up on the quarter, the major individual stock markets saw returns ranging from up 5% to down 5%. By limiting the downside, we are better able to maintain our long term investment focus, and reduce the temptations to change course after markets decline.
Even with a fairly flat last quarter, most TriDelta clients are up around 5% over the past 12 months to the end of September.

By planning long term and adjusting a well-positioned investment mix a little along the way, we can avoid the pull towards major changes when people are most nervous. There is a lot of reason to believe that there are some good returns ahead between now and February, and you don’t want to miss them. This doesn’t mean that all is fine in the world and things will only go straight up. What it means is that your investment portfolios already have some pretty good shock absorbers. This should help you to avoid getting too aggressive in good times and too nervous in bad times.

We hope that you get to enjoy some spectacular fall foliage whether in Ontario, Alberta or other parts of the country, and we thank you for your continued trust.