As we walked among the crowded midway, I was asked a few times whether they could try this game or that. I said “not now” a few times until I eventually told them “I will give you $20 to share. It is your games budget. Once it is done, no more games.”

I immediately noticed an incredible transformation in their behaviour and approach to the games. No longer would they do the rope ladder game at $10 a pop that 30 minutes earlier they had been so interested in. The $5 whack a mole was no longer worth it, given the prizes. They suddenly became the ultimate in value shoppers. Each game was studied in terms of price, prizes, and perceived difficulty. Questions were asked of the people running the games, and even lengthy observations took place of the crowds playing to determine who was winning and what paddle, gun or ball they used to get there. 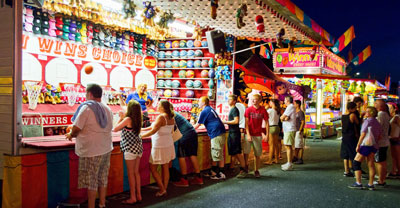 As I watched this transformation, it became perfectly clear. Their earlier requests required nothing of themselves. It wasn’t their money. It was from some mysterious and seemingly deep well of funds that you could ask for, and even if the answer was no, you knew you could try again at some point. Now it was different. This was their money. It was limited. Decisions and tradeoffs were required. They knew that they had to treat the funds with respect and care.

The end result of their game adventure was that the $20 had been spent, but they stretched it for a good hour, while managing to win a taco pillow and a hat that I think was a turd emoji (they are 11 and 12 year old boys after all). I recognize that with some kids, this transformation would not have happened, but in this case I found it fascinating. What could be learned from this? How can the CNE experiment be applied to the greater good?

Now I turn my attention to the federal government of Canada. They too are essentially back at school, actively running our country to the best of their ability. The question is whether they run this massive enterprise by asking their parents for money from a seemingly bottomless pit or do they act as if they have $20 and they have to make it work. I think you know the answer to that one.

Here are the basics for the federal government:

These figures are for just the one year.

The federal government’s market debt — the debt on which Ottawa pays interest — topped $1 trillion in March of this year.

In a year where the economy is in relatively good shape, how can we project an $18.1 billion deficit? To learn from the CNE example, how about this ‘You have $323.4 billion to spend, and that is it. Once it is done, there is no more money.” How hard is that? This isn’t 2009. There is no economic crisis. This is a year where there is absolutely no excuse for running an annual budget deficit.

How about the debt? How would I talk to my kids about that one? I would tell them that you are very fortunate to be able to go to the CNE and have fun. You have $20 for games, but I really think you should set aside $2 from that and use it to give to someone that isn’t as fortunate, or to save it for something later this year that you might want to spend it on.

I know this isn’t a perfect analogy, but my son and nephew don’t owe anyone $1 trillion. However, I know someone who does. Guess what that group plans to do in 2018 instead. They plan to add another $18 billion to the amount they owe. If my son and nephew did owe someone $1,000, guess what they wouldn’t have been doing at all. They wouldn’t be using $20 for games at an amusement park. The $20 would have gone to paying down that debt.

I know that it isn’t right to compare federal government spending to games at an amusement park, but maybe it isn’t so far off. In the small category of questionable government spending, we have the $155,000 that was spent last year to have a red couch travel the country by RV to celebrate Canada150. In the large category, we have the $4.1 billion that has been provided by the Federal Government to Bombardier in the form of grants, loans and other investments since 1966 — a significant amount of which took place in the past three years.

I understand that setting budget priorities is a very difficult job, and even the examples above can be argued as to whether they were appropriate or not. The key point is that if federal government employees had some feeling that this was their own money being spent, it is hard to imagine these and other expenditures would have happened.

So where does this leave us?

Whether it is with your kids or our elected officials and their staff, there needs to be a greater connection to and ownership over spending. Perhaps with the federal government, there could be a reduction in government pension contributions equal to 3 per cent of annual budget deficits. As an example, for 2018, if we end up with an $18 billion deficit, there would be a $540 million deduction in government pension contributions. That would at least be a start when it comes to helping all federal government employees feel like it is their money being spent.

As it stands today, it often feels as though our government’s spending discipline is like a kid asking for money to play the ring toss game at the fair.