0 Comments
October 19, 2017 Tridelta Investment Counsel
How did Markets do? 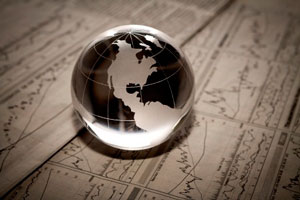 Fortunately the quarter ended on September 30th, with Bonds recovering some of their losses and stock markets globally and locally all ending up stronger.

Other Non-North American stock markets were strong, in particular Emerging Markets, which were up 8.3% (4.3% after the Canadian currency impact).

The FTSE Bond Universe (previously the DEX Bond Universe) was down 1.8% on the quarter, in large part based on sooner than expected interest rate hikes in Canada.

How did TriDelta do?

Our TriDelta Growth Fund had a 2.2% return on the quarter.

Our TriDelta Pension Fund was down 0.1% after a strong first half of the year.

Our TriDelta Fixed Income (Bond) Fund was down 0.2%, but that was in a quarter when the Bond Universe was down almost 2%.  Overall, while the Bond market has done poorly, TriDelta has meaningfully outperformed.

Our TriDelta High Income Balanced Fund was down 0.5%, largely due to its high Bond exposure.

Most of our Alternative Income strategies continued to do what they are supposed to do, which is provide consistent annual income and growth of 6% to 10% a year, regardless of stock or bond market performance.  This translated into a 1.5% to 2.5% return on the quarter.

Our current view of the world ahead 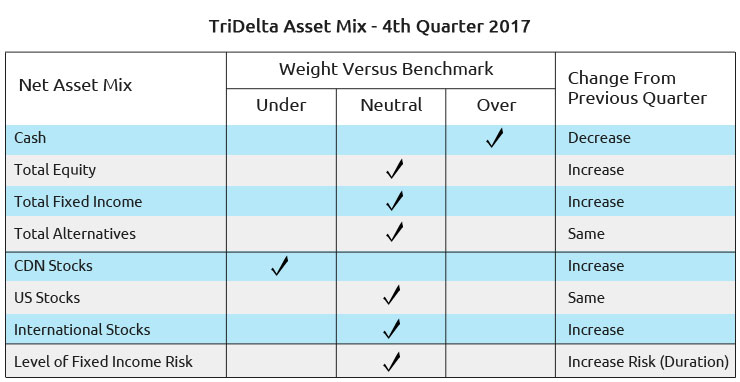 Edward Jong, the Portfolio Manager for TriDelta’s Fixed Income Fund, likes to say that there is an ability to make money in Bonds in declining, flat or rising interest rate environments.

He has worked through all scenarios in his 25 years managing Fixed Income investments, although it would be safe to say that declining interest rates have been the predominant direction during his career.

Over the past year, Edward’s active approach has led to a 3.6% return.  On its own, that return isn’t overly exciting, but in comparison to the -3.1% return of the benchmark (BMO Aggregate Bond ETF), it is a 6.7% ‘beat’.  As a result, the fund ranked in the top 3% of all Canadian Fixed Income funds in the past year.

The fund takes an active approach and that can be seen in the various tools that are used to generate this performance.

Two months ago the fund had:

*A shorter duration than the index, meaning that it had a higher exposure to bonds with a short term to maturity, and a lower weighting in long term bonds.  This was done to reduce the funds exposure to the expected interest rate increases.

*The fund had significant exposure to Corporate bonds and little to Government bonds.  This was reflective of our view that the overall economy was strong, and that the higher yields on Corporate bonds would come with a relatively low level of risk.

*The fund had some exposure to higher yielding names – again reflecting a comfort in both the names and the overall economic environment.

*We owned some Preferred shares in the fund as they provided higher yields and Rate Resets actually benefit when interest rates are increased.

*We owned some U.S. $ bonds, but had a partial currency hedge in place to lessen our U.S. dollar exposure.

Today, two areas of the fund have changed:

*Due to our view that Canada will not be raising rates in the coming few months (while the market still believes this is a reasonable possibility), we have extended duration on the fund, essentially selling some short term bonds and replacing them with longer term bonds.

*We have removed the U.S. dollar currency hedge, and are exposed to currency fluctuations on our U.S. holdings.  We believe that the Canadian dollar will decline, and it will improve our overall returns.

The bottom line is that in this low yield environment with flat to rising interest rates, it is this active approach to the market that enables our clients to significantly outperform on the Fixed Income portion of their portfolios.

The current mood is steady as she goes, while keeping a firm hand on the tiller.

The level of stock market volatility over much of the year has been ‘unseasonably’ low.  In fact, in the United States, the largest market decline this year at any point has been just 3%.  Almost every year you will see a decline at some point of at least 5% to 10%.  That is normal.  What we have seen this year is not.

While we are confident in markets overall, we should also keep in mind that there will likely be a decline in stock markets of 5% to 10% in the months to come.  We should mentally prepare for it.  The good news is that when this happens, a diversified portfolio of Bonds, Alternative Investment Solutions, Preferred Shares and maybe cash, help protect your capital and lower your risk.

In cases, where your stock weightings have grown beyond their traditional weights, we will be working to rebalance portfolios by taking a little profit over the coming weeks.  Consider it to be our TriDelta version of the Squirrel busy putting some nuts away for the long winter.

All the best and our continued appreciation for putting your trust in us.