/ Quarterly report / Q1 TriDelta Investment Review – What a great start to the year!

Q1 TriDelta Investment Review – What a great start to the year! 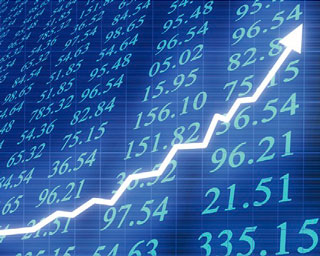 After a great first quarter for our clients, stemming from high exposure to U.S. stocks, preferred shares, and high yield bonds, our investment direction is shifting slightly.

We’re witnessing some exhaustion in U.S. stocks, signs of some greater opportunity in Canada and Developed Markets outside of the United States.   We’re reducing our high yield bond weighting as those valuations have become expensive.

We remain positive on Alternative Investments and we are comfortable with Preferred Shares.  Our bond portfolios are leaning more defensive after strongly benefitting from a more aggressive approach over the past 6 months.

The net effect is that there are still some good investment opportunities heading into the summer, but for U.S. stocks at least, we are pulling back from our heavily overweight position.  The U.S. market has been leading the way globally over the past three years, and this has led to higher valuations in the U.S. than most other markets.

In terms of Canadian stocks, we have been very underweight for a few quarters, and will likely be adding to our current positions this quarter.  This is based on surprisingly positive economic numbers, and a belief that there is some upside in energy related stocks from here.

We will also be increasing our cash holdings as a tactical defensive move – as we watch Trump try to get the support of the Republican Congress, tensions with Russia over Syria and North Korea, and the latest EU developments.

Preferred shares were very strong, with the TSX Preferred Share index up over 7%.

The key positive fundamental trend is global reflation and better growth, particularly in Europe and Emerging Markets.  Overall, this should be positive for stocks.

The key political issue is whether the U.S. can drive ahead with meaningfully lower corporate tax rates and infrastructure spending.  If they can make this a reality in the coming months, it will provide a further lift to U.S. stocks.  Our fear is that there are enough signs to suggest that this expected change will take longer to come to life (and could be more watered down) than the market had hoped.

How did TriDelta do?

Q1 2017 was one of our best ever.  Most clients ended the quarter up between 3% and 5%.  Those with higher returns tended to have more exposure to Preferred Shares, as our portfolio was up over 10%, and were also invested in our Pension portfolios which had stock returns of over 6%.

Our TriDelta Growth Fund had a healthy 4% return on the quarter.

While the Canadian bond universe was up only 1%, our TriDelta Fixed Income Fund was up 3%.

The TriDelta High Income Balanced fund continued its strong result – the Fund has had 14 consecutive positive months.  It was up over 4% on the quarter, and up over 20% over the past year.  This 5 star rated fund (Globe Fund), is meant to provide a much higher yield than bonds (currently a 5.1% yield), and stock like returns, but with lower volatility than stocks.  The fund has now moved from monthly to daily pricing.  This means that it can be purchased or sold on any market day, greatly enhancing liquidity.

Most of our Alternative Income strategies continued to do what they are supposed to do, which is provide consistent annual income and growth of 6% to 10% a year.  Unfortunately, in a quarter as strong as Q1, those 1.5% to 2.5% returns on Alternative Income felt underwhelming.

What investment shifts are coming and why?

At the risk of oversimplifying things, here is the synopsis:

*The U.S. equity market has been too good of late, and with higher than average valuations, we believe there is less upside from here, especially if corporate tax changes don’t come soon or as fully as the market expects.  We accurately timed an overweight position in the U.S., but will now be trimming our positions back to a more neutral or slightly under neutral weighting.

*The Canadian equity market has been underperforming most other markets over the past 9 months, and we have been highly underweight Canada vs. our benchmark.  We will now be increasing our weight a little in Canada, mostly driven off better than expected economic numbers.  While we are aware of the residential real estate risks, until mortgage rates meaningfully rise we believe the general rise in real estate values will continue.  We also believe that oil prices seem range bound in the $50 to $60 zone, but have some room and support to rise within that range, from today’s prices.

*We will be slightly increasing our weighting in developed global markets.  This is largely a shift from the U.S. where stock valuations are much higher than long term averages, to markets that are currently trading at or a little below long term averages.

*For fixed income, we are keeping our powder a little dry with lower bond durations/terms to maturity.  We are doing this as we see longer term bond yields increasing from current levels.

With yields starting off near the lower portion of the trading range, our defensive duration posture will allow for a more opportunistic investment in the longer end of the yield curve once interest rates work its way higher. Ultimately, the force of Canada’s gradually improving economic situation will convince the Bank of Canada Governor that an eventual rate hike is unavoidable.

*We will likely boost cash positions tactically for a short period as we take some profits and wait out a couple of areas of concern.  As discussed, one area is the ability or inability of Trump to push through major Corporate Tax cuts.  The expected cuts have been a meaningful driver of U.S. market growth, and any delays will be seen negatively by the markets.  Another concern is Syria and events in North Korea and the impact on U.S.-Russian Relations.  A final worry relates to E.U. solidarity or lack thereof, which will be tested in national elections.

*Canadian Dollar/U.S. Dollar – We have been seeing weakness in the Canadian dollar for quite some time, and while it has declined a little, it has mostly maintained its value of late.  While we do see room for declines if NAFTA changes hurt Canadian trade, we also see some economic strength in Canada, strength on the oil front and a lack of willingness to restrict foreign buyers of real estate.  As a result, our current view is a relatively range bound Canada/US dollar trade. 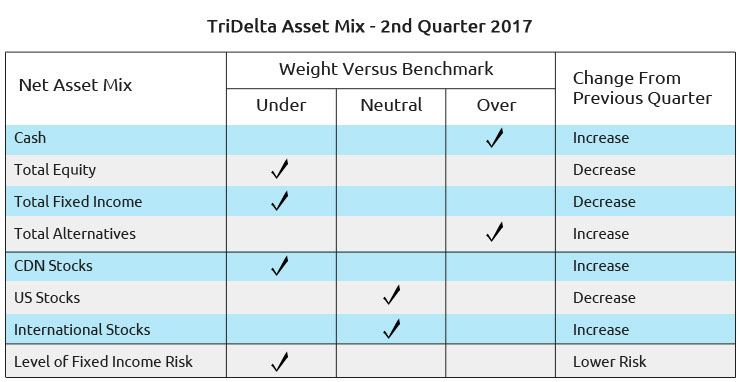 The news requires a headline every day, but how many of those headlines should really change the management of your investments?  Mostly we focus on earnings, valuations, and interest rates to drive the portfolio decisions.  This quarter sees some changes in our thinking – but likely the only headline that played into our investment thinking was Trump’s inability to pass a new Health Care bill.

The best ways to build long term wealth and income are buying quality assets at reasonable prices, diversifying your holdings, being patient when valuations are not in your favour, and having the fortitude to switch when prices become more attractive.

We hope everyone will be able to fully enjoy the splendors of spring.