You have been told time and again that you are one of the lucky ones. You have a defined benefit pension — meaning that when you retire you will get a fixed monthly payment for as long as you live.

As you may be aware, a low interest rate at the time you take what is called the commuted value payout of your pension, can add hundreds of thousands or even millions to the value of that payout depending on the size of your overall pension. As interest rates rise, that payout gets smaller.

The key interest rate for most Canadian pensions is the Bank of Canada five-year bond yield. This is often the number used to help calculate your commuted pension value. On Feb. 10 2016, the five-year yield hit an all time low of 0.41 per cent. That was the best day for a commuted value pension (or best month as they are usually valued monthly). As I write this, the five-year yield is now 1.14 per cent — or almost triple where it was in mid-February.

Before you think the pension opportunity is now gone, keep in mind where it has been: In March 1990, the five-year yield was 11.6 per cent. We are still at unbelievably low bond yields, and you are still in a golden period for getting huge lump sums in place of your pension. Time will tell if this golden period is coming to an end, but some analysts believe that we will never see a rate as low as 0.41 per cent again in our lifetimes.

To better understand the power of interest rates on your pension value let’s start with the humble annuity. A pension is essentially like buying an annuity. In this case you would pay a lump sum today and in return you would receive a monthly payout for the rest of your life. An annuity is also kind of like buying a lifetime GIC and locking in the rate. Today, you wouldn’t get very excited locking in a lifetime GIC that pays out 2 per cent. You also wouldn’t get that excited locking in an annuity with that type of return. For example, today you would need to put in $1 million as a 65-year-old couple in order to guarantee a payout of $51,000 a year until you both pass away. As unexciting as those rates and payouts would be, a pension commuted value is the opposite. Today it is tremendously exciting.

I am definitely oversimplifying a complicated formula here, and the math wouldn’t work out quite as above, but it is meant to show you the directional impact of interest rates on your pension commuted value calculation, and why this golden opportunity might slip away if interest rates meaningfully rise. 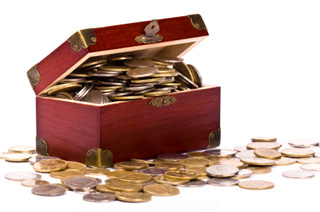 I find that many people never even consider taking a commuted value lump sum. After all, their monthly payout in retirement is what they have been working for their entire working careers. However, would you think of it differently if you knew that your employer was really hoping you would not consider taking the commuted value now?

In some cases the opportunity to take the commuted value or “take the cash” is not an option. Sometimes this is an option only at retirement or if taken prior to age 55 or prior to age 50. It is certainly worth finding out what options you have in your own plan.

When thinking about what route you would want to take in addition to thinking about your health, the companies’ health, tax planning etc., one of the key questions is whether you could earn more from the commuted value than from the pension payouts. One set of analysis that we normally do is a break-even comparison. We set things up to be as much an apples to apples comparison as possible.

In most of our pension reviews at the moment, the break even rate of return required is in the range of 3 per cent to 3.75 per cent to age 86. What this means is that if you invested your commuted value, and did monthly withdrawals at the exact same rate as you would have for your pension, you would only need to have earned say 3.5 per cent a year return to fund everything to age 86. If instead of 3.5 per cent, you actually received a 5.5 per cent long-term return, which we believe is extremely doable, you will have not only been able to match your pension payouts dollar for dollar, but would likely have several hundred thousand dollars left at the end for your estate instead of the $0 left with a standard pension.

Now this analysis will come to different conclusions in a higher interest rate world. If the break even needs to be 5 per cent+, in many cases I would consider taking the certainty of the pension. However, as long as the break evens we are seeing are in the 3 per cent range, it means you are giving up returns every year. We believe that taking the commuted value of a pension, if you are lucky enough to be able to do so in today’s interest rate environment, is something to consider strongly.

I am not suggesting that it is always wrong to keep your pension. In most cases, a government or quasi-government pension provides you with certainty on income for the rest of your life. If you and/or your spouse have good genes and are in good health, it is quite possible that you will receive the pension for extra years compared to your peers. There are also sometimes health benefits attached to a pension that provide some real value and peace of mind.

The decision of whether to receive a pension in monthly amounts for life as opposed to taking a lump sum is a complicated matter. What I do know is that your employer believes that paying out the commuted value today will cost them too much, and would likely prefer you don’t even consider it. That is reason enough for you to explore it further.