Below you will find a real life case study of a couple who are looking for financial advice on when they can retire and how best to arrange their financial affairs. The names and details of their personal lives have been changed to protect their identities. The Globe and Mail often seeks the advice of our VP, Wealth Advisor, Matthew Ardrey, to review and analyze the situation and then provide his solutions to the participants.

Written by: DIANNE MALEY
Special to The Globe and Mail
Published Friday, Jul. 15, 2016

Like so many people with defined-benefit pension plans, Norman and Lena can hardly wait to retire. He is 51, she is 50. They have two grown children. 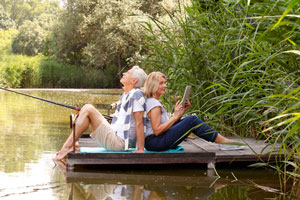 Norman works in manufacturing, earning about $93,700 a year. Lena works for the provincial government, earning $88,900 a year. Although their pensions will not be indexed to inflation, they give the couple choices that people without such plans likely don’t have.

The couple’s goals are to pay off the mortgage on their Greater Toronto Area home, retire and travel. They have a mortgage of $142,340 on a house valued at $750,000.

Should we be continuing to make such high mortgage payments to get that paid off, or should we be investing more money in our RRSPs?” Lena asks. Norman wants to retire in September 2017, while Lena would retire a few years later.

One large question looms over this couple, the planner says: Can Norman retire even though they will still have mortgage debt? Likely, Mr. Ardrey concludes, but the priority is to pay off the mortgage. “If they maintain their current payment schedule,” he says, “they should be debt-free by 2020, which is only a few years after Norman retires.”

Norman and Lena use their RRSPs to save for retirement. She saves $2,600 a year and he saves $3,400 a year. They use their tax-free savings accounts for short-term goals, such as vacations.

In addition, both do some work on the side, bringing in at least $2,100 each a year. In preparing his plan, Mr. Ardrey assumes they continue with these roles until their respective age 65. Because they are retiring early, Mr. Ardrey assumes they will get 75 per cent of the maximum Canada Pension Plan benefits; they will get full Old Age Security benefits. “Both of these pensions will be taken at age 65.”

He further assumes that the rate of return on their investments averages 5 per cent annually, that the inflation rate affecting their expenses is 2 per cent and that they live until age 90.

When they retire, they plan to spend $55,000 a year – close to their spending today once savings and debt repayment are removed, Mr. Ardrey says. In addition, they would like to travel, spending $10,000 a year from when Norman retires until his age 80.

Based on these assumptions, Norman and Lena should be able not only to meet their retirement goal, but have a substantial financial cushion,” the planner says. Once their debt is paid off, they can increase their spending by $27,500, to $82,500 a year, over and above travel spending.

Having this financial flexibility is important for the couple because they plan to retire so early, leaving a lot more time for life to present a problem that requires a financial outlay,” Mr. Ardrey says. As well, their budget is less than precise. Spending in some categories is high; in others, such as car expenses, clothing, gifts and vacations, it’s non-existent. He recommends they prepare a more detailed budget before the final retirement decision is made for Norman to ensure the target retirement expenses match what is actually being spent.

Finally, Lena and Norman should review their investment strategy. They have five RRSP accounts, one spousal RRSP and one locked-in retirement account (LIRA). “Though the spousal and LIRA accounts cannot be consolidated, the RRSPs can,” the planner says. Consolidating them would make them easier to manage.

Their retirement assets are invested in balanced funds and individual stocks. “An investment strategy that focuses on asset mix and disciplined investing would serve them better,” he says.

Their current asset mix is 23 per cent cash and fixed income, and 77 per cent equities. Mr. Ardrey suggests they shift their holdings at a rate of 5 per cent a year until they have 60 per cent equities and 40 per cent fixed income. “This,” he says, “will help with any volatility in the markets as they approach and enter the early part of their retirement.”

The problem: Can they retire early while paying off a mortgage without affecting their retirement spending goal?

The plan: Keep up the big mortgage payments so the debt will be repaid a few years after Norman retires next fall.

The payoff: A sizable financial cushion to buffer any expenses that might arise.