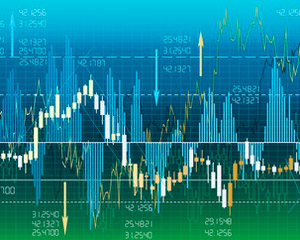 Brexit, Trump and Terrorism.  Take all that together, and surprise, surprise, the markets went up.

Even leaving North America, which has been a treacherous thing to do this year, the EAFE (Europe, Australia and Asia and Far East) index was down just 0.3% – although the index is down 10.4% year to date.

It was a great quarter for precious metals and materials, and it was a very good quarter for ‘safe’ stocks like BCE and Enbridge.  Some of the sectors in between struggled a little.

This quarter was a reminder that the stock market can be very resilient.  It will  bounce back from all sorts of bad news.

In a research study (by Ned Davis Research) of the Dow Jones index in the United States, it showed that strong performance generally follows a major loss day.  On average, among all the major losses reviewed, there was 6.7% in average losses on that down day, and the gains on the index following that loss date were as follows:

One of the major reasons for the numbers above is that including all the bad days, the long term average annual return of the S&P500 has been 10% a year.  The long term average for the TSX is closer to 9% a year.  Over time, stock markets go up and that is why when you decide to sit in cash for investment reasons, you are often swimming upstream.

The key message is that it is better to stick to your overall investment plan before, during and after a major event, than to try to make major asset mix changes to outperform.  It is too easy to be left on the sidelines as the markets rise again.

How Did TriDelta Do?

This quarter, most TriDelta clients were up between 2% and 3%.

Our TriDelta High Income Balanced Fund had a very good quarter – up 7.9%.

The best investments in our Pension portfolio models were Mondelez and General Mills, both up 14% during the quarter.

The best investments in our Core Growth portfolio models were Tahoe Resources up 49% and Barrick Gold up 31% during the quarter.

The worst investments in our Pension portfolio models were Computer Programs and Systems (discussed below, which we bought after it had already fallen a little), down 23%, and Apple down 11% on the quarter.

The worst investments in our Core Growth portfolio models were LyondellBasell down 22% and Concordia Healthcare down 16% during the quarter.

The TriDelta High Income Balanced Fund benefited from higher exposure to materials names that were very strong performers.  The fund also benefits from its ability to leverage allowing for higher yields on the bond portfolio.  Essentially we are able to borrow within the fund at a rate of 1.4%, and invest in bonds that typically have a yield of 3% or higher.  This leads to the higher income in the fund.

Our overall performance reflects an investment strategy that aligns with that of our clients.  We want to do more to protect on the downside, while we aim to achieve or beat the long term return targets in your financial plans.  Most of our clients are OK being up 6% in a year and not beating the ‘market’, but are not OK to be down 10% or more even if we meaningfully outperform the ‘market’.  This quarter was a good example of achieving that goal.  We certainly have clients who are looking to beat the market, and their portfolio is set up accordingly, but even in those cases, there is some risk management in place to try to soften the blow of bad investment markets.

What Did TriDelta Do?

This quarter we are going to take a closer look at some trades, how they have turned out so far, and the reasons for those moves.

As we do every quarter, we look at dividend changes for stocks that we own.  We believe that dividend growth is a key component of long term returns for conservative clients, and track these changes carefully.  This quarter, there were no dividend declines and 9 companies grew the dividends, with the leading dividend growth coming from Apple at 9.6%, LyondellBasell at 8.9% dividend growth and Restaurants Brand International (Tim Hortons and Burger King) at 7.1%.

In the Bond world, the continuing decline in government debt yields helped produce solid gains in the 2.5% to 3% range for the quarter.

We probably shortened the bond duration a little too early, as the Government of Canada bonds have continued to do well, but when it comes to bonds, if you can lock in decent capital gains on a trade, this often adds significantly to overall returns.

At this stage, we remain comfortable with our higher U.S. stock positions.  We believe the Canadian dollar should be fairly stable, but given all of the Global gyrations, the United States is the safer place at the moment.

The U.S. Federal Election will become a bigger influence on the market.  As it turns out, a Republican win would likely hurt U.S. and Global Markets in our view….as it has the drag along effect of having a guy named President Trump running things, who is seen as protectionist and against free trade.

At this stage it looks more likely that Clinton will be the next President, and while not all industries will be happy (i.e. Pharma companies), the overall market could breathe a sigh of relief.

We do actually believe that the U.S. Federal Reserve will raise rates at some point this year or early next year, and it is even possible that Canada will as well.  However, we don’t believe a small increase and a temperate statement from Central Banks will cause too much concern for markets.

At TriDelta Financial, we are continuing to look at Alternative Investment products to provide higher income and lower volatility to portfolios.  We are also introducing TriDelta Equity pooled funds in the third quarter.  These shifts are meant to provide better overall investment performance, along with greater ability to use investment tools that can lower downside risk and increase income.  Your Wealth Advisor will provide more details shortly.

Growing portfolio values make everyone happier, and we are cautiously optimistic that we will see more growth ahead.  The current challenge is to watch for areas of overvaluation if corporate earnings do not grow to support the increased stock price.  We will also watch for changes in investor sentiment which can happen for any number of reasons.  As you can see from our trade analysis, while we may not always hit a lot of home runs, you can still win games by doing the little things right.  Hopefully the Blue Jays will do a little of both and make the summer ahead even more fun.

We hope that everyone is having a great Summer so far, and that the current positive investment environment will continue into the Fall.