After strong investment markets in 2013, there were some real questions about valuations heading into 2014.

At least for the beginning quarter of the year, we remained fully invested and leaned a little aggressively. This has paid off as the quarter was quite positive for stocks (more so for Canada than the US). Even bonds and preferred shares had a bit of a rebound, continuing some of their gains from the last quarter of 2013.

The question remains whether to take a little bit off the gas to defend against a potential pullback or to continue to move fully forward.

As we write this, we continue to be impressed with the projected earnings growth that corporations are providing. If this growth is achieved, then markets are not particularly expensive at this point. This gives us some confidence, but we are a little more wary today than we were at the beginning of the year.

IF we make a strategic shift at some point this quarter, there are many ways to adjust portfolios.

While we are prepared and ‘at the ready’ to make some of these adjustments, we are not doing so right at the moment. We need to see signs of slowing corporate earnings before we would pull the trigger – and at the moment we are not seeing it.

From a global perspective, the first three months of 2014 did see some volatility as global equity markets dipped and recovered.

Fixed income markets benefited from a flight to quality during this period and a slight psychological shift against higher rates anytime soon.

Globally, signs of improvement continued in the North American markets. The post-Olympic turmoil between Russia and the Ukraine increased global tensions especially in Europe, where many countries rely on Russian oil and gas for much of their energy. In some emerging markets economic numbers came in on the weak side raising concerns in these high growth areas. Overall the mood is still net positive and we continue to see very little pressure on interest rates rising meaningfully. As long as earnings growth continues, equities and corporate bonds should be stable.

Global equity markets as a whole performed well during the period with most indices up 6 – 10%. The notable exceptions were China and Japan, which were negative, while Italian equities were some of the best on the globe rising close to 15%. These are all viewed as Canadian currency returns.

Emerging market equity returns were slightly down during the first quarter, but were saved in the last two weeks as a strong rally helped eliminate a decline that came close to 10%.

Precious metals rebounded with a vengeance as Gold rallied right out of the gate and at one point was up more than 17% before a correction late in the quarter reduced almost half the gains.

In the first quarter, fixed income exhibited broad based strength. The Canadian bond universe, FTSE TMX Canada (formerly DEX) Index, recorded its first monthly negative return of 0.19% in March of this year after gaining 2.96% in the first two months of 2014.

Our view on interest rates 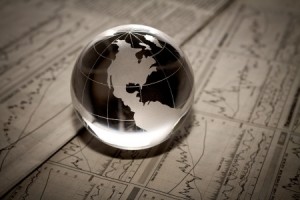 Direction of interest rates is far from certain as a variety of conflicting economic signals in our mid-term time horizon. The global macro economic landscape has marginally deteriorated, while U.S. economic conditions haven’t seen any dramatic improvement since the US Federal Open Market Committee (FOMC) embarked on tapering their asset purchase program. The FOMC has also definitively said (as definitive as they can be given that their actions are subject to many variables) they will be moving overnight interest rates higher by the spring of 2015.

We do not share the moderately aggressive FOMC assessment; however, we recognize the need to end tapering and to return monetary policy back to managing overnight interest rates, and not managing the yield curve. We believe geopolitical uncertainty, a cooling Chinese economy, struggling EU region, and weather tainted North American economic statistics make it immensely difficult for the FOMC to remain committed to any policy action – other than the expected tapering – that may jeopardize the fragile recovery. The greatest uncertainty is whether the recent strong economic news in the US continues. Given these factors, interest rates should not rise meaningfully and should remain in the same trading range as established over the past 12-months.

The Canadian economic landscape could be described as somewhat less cloudy compared to our neighbours down south. The Bank of Canada Governor, Stephen Poloz, has been more transparent. Interest rates are to remain low for the foreseeable future. This has been helpful for market participants, but a struggle for those who prefer to have a stronger Canadian dollar. His clarity reinforces the trading range for 10-year government bond yields to be trapped below 3.00% for some time to come. This is good for mortgage rates and for long term bond returns.

Given the current economic landscape, coupled with geopolitical and ongoing economic concerns, and the disparity over the course of monetary policy action, we remain supportive on corporate bonds and will seek to add to overall portfolio yields through moderate term extensions (holding longer term bonds).

First quarter 2014 was a very positive one for TriDelta clients. Depending on risk tolerance/asset mix, most clients were up between 4% and 5% for the quarter, with the high growth oriented clients doing better, and the most conservative returning a little under that range.

The TSX had a total return of 6.0% and the S&P 500 was up 1.8%. A stronger U.S. dollar during the quarter helped all of our American holdings adding 3.9%. The broad Canadian Bond Universe was positive as well returning 2.8%.

In our equity portfolios we noticed a shift away from riskier assets during the quarter which worked well for us as our process focuses on stable earnings and dividend growth. From a sector standpoint our underweight in Financials and overweight in Utilities added to the performance of all portfolios.

U.S. Equities lagged their Canadian counterparts by a decent margin. This was the first time Canadian stocks have significantly outperformed the U.S. equities on a quarterly basis since 2010. The stronger U.S. dollar helped overcome this disparity in returns. Overall U.S. stocks performed in-line with Canadian equities when currency was factored in.

Dividend growth is a core theme of our investment management and stock selection. In order to highlight this importance we show quarterly dividend changes. This quarter was very positive and we were proud to own the following companies that increased their dividends:

We have enjoyed strong returns for another quarter, but equity valuations are getting close to the higher end of the acceptable range. As long as earnings growth continues we are comfortable with equities going forward – but we are watching very closely for any shifts in direction.

To put it in the most technical terms possible ‘we’re staying at the party, but just dancing closer to the door’.

Thank you for putting your trust in TriDelta.