0 Comments
January 20, 2014 Ted Rechtshaffen Dividends, Interest Rates, Investment performance, investment philosophy, Portfolio Management, tapering, Tax Efficiency, Volatility
Equities maintained strong upward momentum during the fourth quarter of 2013 completing an excellent year. The sustained & better than expected US economic reports, fueled a global market surge that surpassed our expectations.Virtually every major global equity market was up double digits for the year with a few notable exceptions including China and Brazil. Indications suggest that the global recovery following the major market shocks in 2007 & 2008 has taken hold. The recovery is being led by the US economy and is believed to be sustainable although will likely deliver its fair share of surprises as it unfolds further.Emerging market equity returns were slightly positive in the fourth quarter, but as a group recorded slightly negative returns for the year.

Precious metals remained under pressure throughout the quarter and were well down on the year. Gold investors recorded a negative 28.3% return.

Fixed income on the other hand showed signs of stress in light of the broad based US economic strength, exasperated by talks of the US Federal Reserve tapering. Most global bond indices were flat or slightly negative. The DEX Universe of Canadian bonds recorded its first negative return of -1.19% in well over a decade. Losses were driven by government issued debt and bonds with longer maturity dates while corporate bonds in aggregate returned 0.84% for the year.

The Bank of Canada remains concerned that inflation remains well below target, but is also troubled by record high consumer debt levels spurred by low interest rates. This dilemma suggests that they will likely remain neutral (in other words, not increase rates) for some time.

Despite the difficulty of double guessing the Bank of Canada, our opinion is that longer dated bond yields may rise albeit not for some time. Once Canadian rates move higher increases will likely remain within a tight range between 2.5% and 3%. 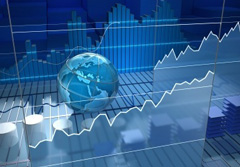 We reiterate that bonds have a key role to play as part of very necessary diversification as we build wealth. We also focus on capital preservation while delivering clients with a steady stream of predictable income. We forecast that our bond portfolios will deliver an approx. 3.5% return in 2014.

US Fed policy remained the big discussion amongst market strategists who debated timing and the extent of QE tapering. December delivered the first decision to begin the easing process with a $10 billion monthly reduction of bond purchases from $85 to $75 billion starting in January 2014. The fear of tapering hindered 2013 bond performance, but we believe it is no longer a big issue and that bond markets have now priced in the effect of eliminating it entirely in 2014.

Despite the positive economic news including the IMF and World Bank forecasts of better global growth in 2014, caution is warranted, particularly after the steep market gains. Our ‘TriDelta 2014 Financial Forecast’ published in late December details our outlook for the year ahead.

Most TriDelta clients had a net return for their portfolio between 6% and 16% depending on their risk tolerance/asset mix. Pure equity returns before fees were 22.45% for our Core portfolio and 18.41% for our Pension portfolio.

What worked well in Q4?

What did not work well in Q4?

One of our beliefs at TriDelta is to be very open about our business, its successes and its weaknesses. Openness is not a hallmark of the financial industry, but something that we believe is important in order to build trust, strong performance and partnership with our clients.

A few of our holdings had negative returns, some of which are listed below:

The Best and Worst performers of 2013

We strongly believe in the power of dividend growth and those companies who have a history of increasing their dividends over time. These companies have generally outperformed the market with lower volatility. This quarter was no exception and we were proud to own the following companies that increased their dividends:

One company we owned removed their dividend entirely, which was a disappointment. It was Iamgold Corp

We’re proud to have protected and grown our client wealth in 2013.

We have also successfully delivered on our core beliefs of comprehensive financial planning, tax efficiency and an investment plan that generally lowers volatility, typically increases income and ensures we own many of the best companies as identified by our exclusive quantitative led selection process.

2013 is another example of our achieving above average risk adjusted returns in an extremely low interest rate environment. We remain committed to our proven investment approach and philosophy.

Thanks for your continued support.